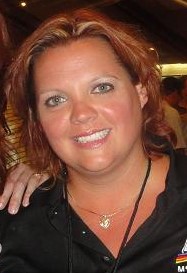 Born and raised in Wilmington, Delaware, she grew up in the Hedgeville section of the city as a member of the St. Hedwig Catholic Church community. Lynn has been in polkas for her entire life. Influenced by her grandparents, Tina and Lou Janucik, she went along on all the bus trips they would sponsor to different events. Lynn grew up with a love for Happy Louie, Eddie B., the Kryger Brothers, TPM, and never missed an opportunity to see any of them in person, especially when they performed at Bernie Goydish’s Polka Spree by the Sea; Johnny and Ann Haas’ Sunnybrook Polka Spree; and Freddie Bulinski and Gil Ziemski’s Polkamotion by the Ocean.  Lynn also holds the title of the last Miss U.S.P.A. 1998-1999.

Lynn, her husband, Stephen Kaminski, and their two daughters, Aleya and Hadley, moved from New Jersey to the western suburb of Bolingbrook, IL in 2014. You may know Stephen from playing with such bands as Jan Lewan Orchestra, Charm City Sound, and FreezeDried. He is also the leader of the Jack Black Polka Band featured in the motion picture, The Polka King, released in January 2018.

Besides being a mother and a band wife, Lynn is most proud to be the Executive Producer of The DIVAS featuring Mary Lou Czerniak, Gennie “O” Okrzesik, and Ania Piwowarczyk which was released in 2013.

Lynn looks forward to contributing to the IPA and the preserving the music she knows and loves so well. Quoting Toledo Polkamotion, “…I listen to my heart. I’m gonna make my mark. I’m gonna make a difference, wait and see.”