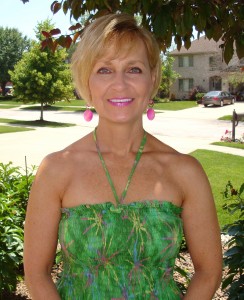 I grew up in Calumet City, a suburb of Chicago, just blocks from the Indiana state line.  I currently reside in Orland Park, a Southwest suburb of Chicago, with my husband Dan and our two daughters, Ashley and Lindsey.  Since I was born, polkas were played in our house every weekend, as we listened to all the radio shows and attended most picnics and church festivals on Saturdays and Sundays.  My dad and brother were musicians, so it was common to hear live polkas playing during the weekdays as well.  Sometimes they would ask me to play drums just to keep that simple polka beat–those were fun times for sure.

As a youngster, I sang at home all the time and knew every jingle that aired on TV, aspiring to record vocals for commercials when I grew up.  I sang in choirs and several musical shows since the age of 9 and studied voice in grade school and high school.  I always loved to sing and hoped one day in my lifetime to enjoy performing with a band of some kind, more than likely a country band.   I’m thrilled to be a part of the IPA Tribute Band.  This is especially meaningful to me for several reasons:  I sing music that I love while promoting an organization that I profoundly believe in.  Also, I enjoy the opportunity to create music with my husband while having the privilege of sharing a bandstand with talented musicians whom I grew up with and have known as friends for over 40 years.  I can’t think of a better way to spend my free time than furthering the future of the music I love most!

Since 2011, I’ve have been involved with several aspects of the IPA board.   Those include Secretary for four years and then continuing on in my current role as a Director.  Over the last four years, I’ve been in charge of Door Sales for our festival and convention, helped organize the Pro Am Jam events, handled Website Store Fulfillment, and managed T-shirt design and membership drives to help grow our membership base.  Our board is proud to have exceeded 1,000 members in 2018!

I hope to assist the IPA in becoming an organization that is respected as a leader in the promulgation of polka music.  I am honored to be entrusted to make decisions on behalf of the IPA to continue our music and traditions and keep them alive for many more generations to come.