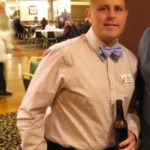 Keith has been an IPA member for years and this year to become more involved with the IPA. He was nominated and voted in as an Illinois director at the 2013 IPA convention and has currently been appointed as the I.P.A.’s Media Advisor by I.P.A. President Christy Krawisz.

Born and raised on the south side of Chicago, in the Hegewisch neighborhood, Keith has been around polkas as long as he can remember and doesn’t remember a part of his life not involving polkas. His father played bass and drums with his uncle’s band, Jerry Pietranczyk’s Polka Sharps. Growing up, Keith used to go to the picnic groves around Chicago as well as festivals. Since then, he has traveled near and far to attend and support the various festivals around the country.  Being a new IPA director, Keith looks forward to helping and working with fellow board members and entire organization to promote and support the music we all love.

Keith and his wife Jennifer currently live in the western suburb of Bolingbrook. Keith says, “For those that don’t know me well, if you see me at a dance, festival, etc., come say hi! I lovemeeting new people. I’m an avid foodie, a runner, and in my opinion, there’s no more fun on earth than Disney World. (Yes I’m a Disney nut!)”