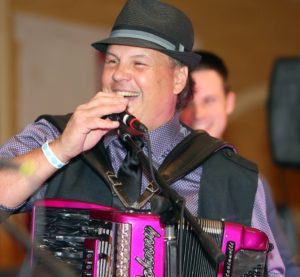 John “Johnny” Krawisz and is the Manager of FreezeDried as well as plays Accordion and Keyboards.  He is also the Accordion player for The Music Company and The IPA Tribute Band.  From a young age he became interested in music through his family. His polka influences came from Eddie Blazonczyk Sr., Jimmy Weber, Lenny Gomulka, Rickie Tokarz, Al Piakowski and John Furmaniak. Other popular musical artists that have inspired him are: The Mavericks, Elton John, Reba McEntire, Elvis Presley, Celine Dion and Maynard Ferganson, Buckwheat Zydeco and Ryan Joseph (Ogrodny). He started his musical career at the age of 12 performing in a band with Ray Rzeszutko, called the Lil Tones.  He also played in many polka bands including: Jimmy Miesala’s Music Explosion; CMA (Chicago’s Milwaukee Avenue); Marion Lush and Downtown Sound.  He has filled in with some great bands including: Eddie Blazoncyk and the Versatones, John Gora and Gorale, Polka Country Musicians, Scrubby and the Dynatones, Toledo Polkamotion, Stas Bulanda and Dyno-Chicago, One More Tyme, Polka Family, Lenny Gomulka and the Chicago Push, The Boys, just to name a few.  He has composed a few songs over his musical career, including:  Oh Baby and Dream’s of Her Tonight. He is a versatile musician. He can play Accordion, Trumpet, Concertina, Keyboard, Saxophone and Clarinet.  He also sings some lead and backup vocals.

He currently lives in Plainfield, Illinois with his wife “Madam President” Christy and has four beautiful daughters, Holly, Tiffany, Katie and Hayley.  He is the proud owner of a Pallet Manufacturing Company, Graphic Pallet, in Plainfield, Illinois for the past 25 years.  Other than playing music, he enjoys: hanging out with friends and family; gambling; golfing; going out to dinner and playing ice hockey.  He also enjoys performing and making music with my younger daughters, Katie and Hayley.