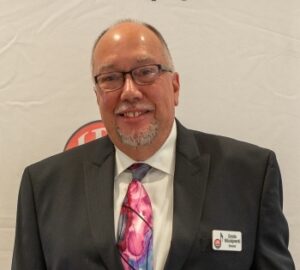 Dennis was elected as an IPA director at the 2013 Convention in Cleveland, OH.  Prior to that, Dennis was a director for the ‘United Polka Association’ Tinley Park chapter.

Originally born and raised in South Bend, Indiana, Dennis moved to the Chicagoland area in the mid-1980s.

Dennis’s involvement in polka music began at a very young age. His parents were polka lovers and took him to such places as the Crumstown Conservation Club picnics where he was able to hear bands such as the Pala Brothers, Marion Lush, and Eddie Blazonczyk & The Versatones. He also traveled with his family from his hometown of South Bend to the Chicago region to visit such polka hot spots as Club 505, Polonia Grove, and the IPA Conventions held at the Ramada Inn on Chicago’s Northwest side.

While Dennis hasn’t played any musical instruments since his days as a drummer in his high school’s band, he does partake in singing in basement jam sessions and at Chet Kowalkowski bonfires.

In 2014, Dennis played the lead role in the re-engineering of the International Polka Association’s website; ipapolkas.com.  The website includes many state of the art features including current IPA event notifications, extensive IPA photo galleries, IPA Hall of Fame Biographies, archived IPA radio shows, and an online fulfillment store where customers can join or renew their IPA membership as well as purchase IPA promotional items.  Dennis is dedicated to maintaining the website’s dynamic content by keeping the information current, accurate, and up-to-date.

By being involved with the IPA, Dennis hopes to continue to find ways to expand polka popularity, explore getting polka music played by mainstream media outlets, and focus efforts into promoting more polka events in the northwest Indiana area. Dennis says, “Polka followers are a tight knit group. So the best way to continue and expand ‘the music we love’ is by working together.  Together, polka music can thrive for many years to come.”