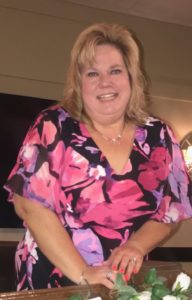 Christy Krawisz has been elected the fourth female in the 51 year history of the International Polka Association during its recent festival and convention which was held over the Labor Day weekend at the Millennium Hotel in the Buffalo NY area. Christy, no stranger to the IPA

executive board, as she was appointed in 2014 to fulfill the office of 1st Vice President when Rick Rzeszutko was elevated to President. In addition, in 1993 she produced the IPA Newsletter and was the Financial Secretary under President Keith Stras. She also served on the executive board from 1995-1997. In 2010, she was elected back to the board where she has served till today.

Christy is the daughter of IPA Hall of Famer, John & Cheryl Furmaniak Sr. (the newly elected Secretary of the IPA) Christy, along with their daughters Katie and Hayley and husband John, (who also has rejoined the board), reside in Plainfield, IL.

Christy grew up surrounded by polka music. Her father’s band, the Dial-A-Tones, was popular when she was a young child, and she was often brought to many polka events in the Chicagoland area. Growing up she admits “I didn’t enjoy it as much as I do now” lamenting over that fact, as her Father also performed with Marion Lush’s White Eagles and Stas Bulanda’s APB for years.

She enjoys spending time with my husband, children, and her extended family. Always willing to lend her talents to others, she has been involved in many area fundraisers. Her experience with these causes and her time on the IPA will further preserve her love of the music.

Christy, together with her board, plan to continue efforts to keep polkas positively promoted and alive. So, others can experience the fun and happiness that the IPA and polka music can provide.