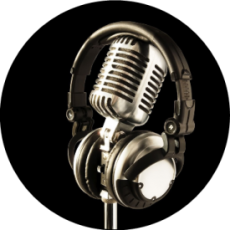 WRJQ is currently an internet-only radio station that plays a mix of oldtime music from the midwest.  At one time, WRJQ was an actual AM radio station in Appleton, WI, at 1570 on the dial.  It originally signed on as WAPL in 1952.

Current owner Aaron Schuelke got his start in radio at WRJQ in 1994 at the age of 13.  Schuelke not only fell in love
with radio, but with the music that WRJQ played, which was a mix of oldtime music and dance band music of the 40’s,
50’s and 60’s.  Schuelke stayed with the station until 1996, when he moved on to other musical formats and radio
stations, but never lost that “oompah bug.”

While Schuelke was employed with WAPL-FM 105.7 in Appleton, WAPL’s parent company, Woodward Communications, purchased WRJQ-AM and dumped the polka format in favor of sports talk.  Due to Schuelke’s obvious love for WRJQ, he was asked to be the one to throw the final sign-off switch in early 2002.  Dick Rodgers’ “Polka Medley #2” was the final song broadcast on the AM version of WRJQ.  Woodward Communications kept the station off the air for about a month, and then re-launched it as “AM 1570, The Score, WSCO.”

In late 2005, Schuelke decided to look into the feasibility and affordability of something relatively new called internet audio streaming.  By January 2006, everything was pretty much in place (although Schuelke will admit there was a large learning curve associated with websites and internet audio delivery … and still is to this day) and Schuelke went public with WRJQRADIO.COM, a website dedicated to the memory of Schuelke’s childhood neighborhood radio station.  The website soon offered an internet stream 24 hours-a-day, featuring polka music.

“Goodtime Radio, WRJQ,” as the station is now known as, has studios in Schuelke’s home on the northeast side of
Appleton.  Anywhere from 800 to 1000 listeners tune into the broadcast daily.