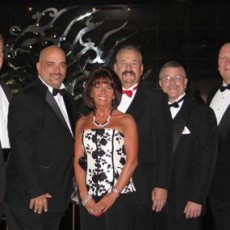 The Eddie Forman Orchestra, also known as “E.F.O.”, is a western Massachusetts polka band that has been performing before audiences since 1968.   Eddie Forman started the band while he was still in high school, and has been creating and recreating music ever since.   The Eddie Forman Orchestra has one of the largest followings in the New England area.   Eddie has been quoted saying:   “It is people like you that have kept us playing for all these years, and as long as you are here, so is E.F.O.”   E.F.O. is known for their standard Polkas with Polish lyrics.   They are without a doubt one of the hardest working bands giving the fans an abundance of music.

The Eddie Forman Orchestra has received numerous awards in recognition of promoting polka music and culture.   Eddie had the honor of being inducted in the International Polka Music Hall of Fame on August 5th, 2006.

The E.F.O. has made seventeen recordings; “Movin’ On” is their most recent.   This recording features a different style of polkas.   The band is composed of a very diverse group of musicians.   They have an expanded repertoire of music and have performed over the years at many venues throughout New England, New Jersey, New York, Pennsylvania, Maryland, Michigan, California and Florida.   The E.F.O. has also been featured on several cruises to the Caribbean Islands and Bermuda.   Eddie along with his wife Carol organizes bus tours taking their large following of dedicated fans to various festivals and polka weekends.

The Eddie Forman Orchestra is in high demand and has performed throughout the United States.   The band’s enthusiasm and love for the music they perform, their versatility and ability to embrace a wide range of styles and their dedication to strong, lively performances make the E.F.O. an enduring success.   People of all ages are invited to join the E.F.O. at a dance and enjoy a fun-filled evening of good music.