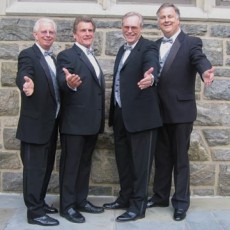 After much deliberation, I am announcing that this current year, 2014, will be the final year of bookings for The Ablemen. I am proud to say that the band is performing in its 51st year, but after all the bookings, traveling, and time away from home, it is time to say “so long” to a musical career that has been extremely good to me.

I began performing with my first band, The Ray Dels, in 1963 at weddings and private parties. We added performances in lounges and clubs to our schedule during the 1970’s. Having grown up on polka music by the Connecticut Twins, Frank Wojnarowski, Frank Gutowski, and Bernie Witkowski, I always had a desire to perform in the polka field. So, in the mid-1980’s, we broke ground in that arena. The Ablemen have continued performing a variety of musical genres ever since.

To dispel any doubts or rumors, there are no physical or health issues that factor into this decision; it is simply the right time. I am looking forward to attending events that I have had to miss during the past seven decades due to our performance schedule.

I have been fortunate to perform currently with loyal, talented musicians who are friends: Jim Obrotka on drums and vocals for 49 years: Joe Annecchino on saxes, clarinet, flute, and trumpet for 30 years; and Bill Miranda on trumpet, flugelhorn, and vocals for 26 years. I also wish to express my gratitude to others who have accompanied me for periods of time on this musical odyssey: my original band mates Eddie “Skippy” Freed and Ronnie Teddick on drums and guitar; Tom Obrotka on sax and clarinet; Bill Wojciechowski on guitar, trumpet, and vocals; Rich Robino on saxophones, clarinet, flute, and keyboards; John Grant on trumpet, flugelhorn, and guitar; and Jim Jordan on trumpet and flugelhorn. Thanks, too, to the female vocalists who worked with us at wedding receptions during the 1980’s and early 1990’s: Maggie McCarthy, Dale Cafarro, Lynn Iossa, Audrey Shane, and Patty Varian.

I also want to acknowledge my late parents for their dedication to my music lessons on the accordion and piano. A debt of gratitude goes to my music teachers, in order, on accordion: June Dee Stark, Ray DeBrown, Freddie Yarosz, and Stephen Harer; on piano – John Mayurnik.

I am proud of the band’s achievements throughout the years, including winning the first place trophy and being acclaimed the Gold Medal Band at the National Polka Festival at Hunter Mountain for three consecutive years in the 1980’s. The Ablemen performed for several years on Fifth Avenue in New York City at the Reviewing Stand for the annual October Pulaski Day Parade and played on floats for various organizations in that same parade during the 1990’s. In addition, we performed during the 2000’s at both Shea Stadium and Citi Field for the NY Mets annual Polish-American Heritage Nights. The Ablemen also appeared on several polka TV shows on WVIA-TV in Wilkes Barre, Pennsylvania. There are also great memories of playing at many polka weekends, festivals, and notable Polish halls – all too numerous to mention.

A special acknowledgement goes to all the DJ’s and IJ’s who have played our recordings on their shows, to friends and organizations that have hired us, to the fans who come out to support us, and to everyone who has encouraged us all these years. Without you, there would not have been a band called The Ablemen.

Finally, I thank my family for their patience and permitting me to follow this wonderful path. To my children Dave, Kim, Neil, and Melissa, I know it wasn’t easy for you having dad away from home. To Donna, my beautiful wife, I couldn’t have done this all these years without your support. Thank you. I’ll be home in 2015 so that we can catch up on some of the things we’ve missed.

To everyone, it is my wish that I get to see you at one of our performances sometime during this year before the journey ends.

May you always be able!