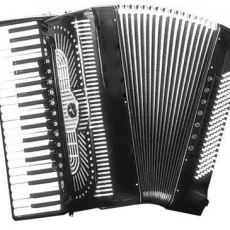 STEVE MEISNER is a multi-talented musician, entertainer, composer & arranger. He began playing the accordion at the age of 5 and has been earning a living in the music business since the age of 16. Steve’s family has a rich musical heritage and he is a second-generation full time working musician. His father, the late Verne Meisner, had a successful music career for over 57 years. Steve’s brand of music is extremely versatile and appealing to a wide audience. He has made a name for himself by taking the music he grew up with from his father and adding his own imagination and feeling. He has brought his brand of traditional American polka into the 21st century with a fresh spark & swing while retaining the roots of this music.

From a young age, Steve has been on task to promote quality music that can be accepted by all ages. His main goal has been to persuade the general public’s stereotypical view of polka music to bring a new awareness to the masses. “I believe that good music is simply good and I believe people know the difference. They may not always understand what the mechanics of it are, but they feel it. And that is where I’ve always placed my faith in people. They too feel that good music is simply good and it makes them feel good.”

In Steve’s 37 year musical career he has performed with the nation’s top accordionists, polka icons & musicians including Myron Floren, Frank Yankovic, Joey Miskulin, & Verne Meisner. He has amassed 21 LP/CD credits, 6 Single, and 7 Video releases with full production credits. He has performed nationally coast to coast and internationally averaging 200 performances annually including performances at the Lawrence Welk Theater in Branson MO, Stardust-Monte Carlo-Hacienda-Orleans & Plaza Casino’s in Las Vegas. He was invited to record for and perform at the Library of Congress, the Kennedy Center, and the Smithsonian Folklife Festival on the National Mall in Washington DC. He and the Meisner brand of music has filtered into television broadcasts and motion pictures including TNN’s Crook & Chase Show and the ABC Network 4th of July broadcast of “In Search of America, a 4th of July Celebration” hosted by the late Peter Jennings and folklorist Nick Spitzer. He and his music are featured a full-length motion picture “Chump Change” released internationally by Miramax and he has been heard and seen on the film festival circuit in a short film called “The Pick Up Polka”. He has an original composition in the independent full-length feature “Red Betsy”. Writer/director/actor Steve Burrows from Hollywood CA call’s Steve “the Mozart of Polka”.

Steve has received numerous awards and nominations including “Musician and Band of the Year”, “Favorite Polka Artist”, “Lifetime Achievement award” by the Maryland Accordion Club, he resides as the 29th inductee to the Ironworld Polka Hall of Fame, and in 2005 an “Honor Roll” induction to the Wisconsin Polka Hall of Fame, he is the first of his generation to reside alongside his father as a “Lifetime Achiever” in the National Cleveland-Style Polka Hall of Fame in 2012. His, and his father’s, original compositions are included on many best selling polka recordings, Grammy nominated recordings, and can be found in the archives of the Library of Congress, the Kennedy Center, the Smithsonian Institute, and Wisconsin state libraries in both textbook and music categories. His recordings are used in preschool and kindergarten classes to teach the young and enjoyed by many generations bringing back memories of care free days.

“My main goal in life is to utilize my musical gift to make as many people happy as I possibly can while I can. Music is a large part of the soul of our society and I want to touch that part of people’s souls…that part of their soul that makes a difference in their lives and show’s them that music and dancing can excite, motivate and heal. There is nothing more gratifying than meeting a new fan who has just discovered my music for the first time. The exp