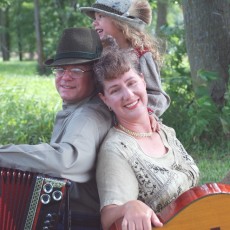 Performances by Steirkraft are unlike those of anyone else. The unique relationship of husband and wife adds a sense of soul to the music that results in a perfect balance of power and tone. Steirkraft’s sound has a personality that is all their own, and their approach to performances is representative of their South German roots: they are fun!

Karl Schröder is one of the most talented button box players in the country. His style of playing is dynamic, technical, and powerful. Karl has been playing professionally for over thirty years and he integrates Bavarian influences into the polka music.

Jane Schröder is the other half of the group’s power and drive. In just a short time Jane has become a nationally recognized guitarist for her special zither effects that she often interjects while performing. Her style of playing her own Steirische harmonika is equally impressive and gives Steirkraft even more punch.

Steirkraft is known for being close to their audiences and it isn’t uncommon to find them speaking back and forth with the crowd. At times Karl might wander among those gathered while playing his harmonika to temporarily join the party off-stage.

Many different musicians often join the group on stage such as the Schröder’s daughter, five year-old Gretchen, but the core of the group always remains the same.

It is often said that music from the heart shows true feeling. If that’s the case, then the husband and wife polka music duo of Steirkraft is a true testament to that belief.