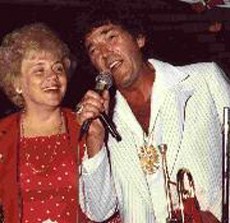 Meet the man with the beat – HAPPY LOUIE of Wilbraham, MA. “Happy” Louie Dusseault was born in Ware, MA, to Mary (Kmon) Dusseault and Louis G. Dusseault. His mother was Polish and his father was French. Both are deceased. Having a natural affinity to music, Louie began his musical career as a young boy. At the age of 9, he played his first note on a bugle and then changed to B-Flat Trumpet. Louie graduated from St. Mary’s Polish Grammar School in Ware, where he learned to write and speak the Polish language. In fact, his father, for being French, had a very beautiful Polish vocabulary. Happy Louie later graduated from Ware High School.

Because of his love for Polish Music, he formed his own band, at the age of 15, and played for weddings, showers and many other social functions. Happy Louie was also a member of the St. Mary’s Drum Corps. While playing, he augmented his musical education, arranging and playing at the Berklee School of Music in Boston, MA. He graduated in 1957.

In the fall of 1957, he entered the US Army and was stationed at Ft. Dix, New Jersey. After completing basic training, he auditioned and was selected to play, for his remaining tour of duty, with the United States Military Academy Band, at West Point, NY. During this time, Louie married Julcia (Midura) on May 3, 1958.

After his discharge, Happy Louie’s Band began to play on a larger scale. The group was signed to play numerous engagements in Massachusetts, Connecticut, New York and New Jersey, both on radio and television. Due to Louie’s keen determination to play and expert backing of his fine, select group of talented musicians, they were considered the finest band in parts all over the country.

In the early 1960’s, Happy Louie recorded 5 albums on the REX Record.  Louie and the band later received a big break when they recorded four Polka albums for MGM (Metro Goldwyn Mayer). In 1965, Julcia joined as a full-time member of the band. Julcia accompanied Louie and the band on all tours, handles the record sales, vocalized and announced. In addition, she also promoted the various functions Louie was involved in. Today, she manages the mail order business and coordinates and also coordinates cruise travel for groups or individuals.

Happy Louie arranged his own music and stunned crowds with his awe-inspiring vocals. He has is own record company, Ha-Lo Records, which was formed in 1968. Ha-Lo Records has released over 35 polka albums, CD’s, cassettes, 45’s and 8-Tracks to date. One of Louie’s MGM recordings, “The Accordion A go-go” is in the movie, The Subject Was Roses, with Patricia Neal. The song was written by Richie Woloss and arranged by Happy Louie.

In 1962, Happy Louie started traveling to other parts of the country and in 1972, he began sponsoring tours to Europe and Hawaii, taking his music to an international level. He has also appeared at many state fairs including The New York State Fair, in Syracuse, performing along side top artists such as the Four Saints, the Lennon Sisters, Dolly Parton, The Grand Ole Opry and many more.

Louie has received many awards throughout the years from various polka organizations for his musical contributions. His tributes include induction into the IPA Polka Hall of Fame in 1982. Louie’s career was long and successful. His talent, magnetism, and polkarisma attracted fans with every live performance and recording.

Happy Louie feels his dreams became realities because of the support of you, the polka loving public, and for this, he is sincerely thankful.

The biggest thrill for Happy Louie and Julcia and the band was to receive a Grammy Nomination in 1995, for their recording, “Your Polka Sweethearts”

May 28, 2012 Happy Louie and Julcia were presented with the 2011 Lifetime Achievement Award from the USPA in Independence, Ohio