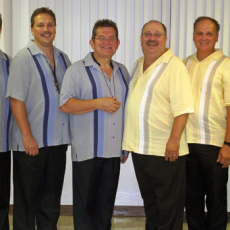 FULL CIRCLE “Full Circle”, is truly an apt description of this band. After many years of grooming, enhancing, and innovating their own Polka music, these musicians have gotten together to recreate a sound that defined the 60’s & 70’s. Their first get-together was spawned by an invitation to play on a Polka Cruise in 2007. Classic hits originally performed and recorded by renowned bands like The Tones, The Naturals, and others are joyfully revisited by FULL CIRCLE. Each of these musicians pursues his own polka endeavors but when opportunity allows, Lenny, Jimmy, Mike, Al, Roger, and Mike get together under the moniker of “Full Circle” to enjoy sharing the timeless sound they rediscovered. Come Full Circle with us!

Lenny Gomulka, formerly from Chicago, now makes his home in Ludlow, MA and is the leader of his own band, “Chicago Push”. He formerly played trumpet, sax and clarinet for the great Eddie Blazonczyk’s Versatones. He was inducted into the International Polka Association Polka Music Hall of Fame in 1988 and over the years, several of his band’s recordings have been nominated for Grammy awards. He has authored the Official State Polka of Massachusetts which was enacted and signed into law by the Congress and House of Representatives in 1998.

Al Piatkowski, from Syracuse NY and is a piano accordion and concertina player extraordinaire. He has performed with over 80 polka bands, including Eddie Blazonczyk’s Versatones, Jimmy Sturr, The Dynatones and The Beat. He also plays locally with with Polish and German style bands in upstate NY. He was inducted into the International Polka Association Polka Music Hall of Fame in 2000. Al has recorded on 7 Grammy winning recordings with Jimmy Sturr and Eddie Blazonczyk.

Jimmy Weber, formerly of the Pittsburgh area, now makes his home in NJ and plays, trumpet, clarinet, and sax. He was leader of the renowned Polka band, “The Sounds” who were nominated twice for the Grammy awards. Over the course of his career, Jimmy has also played with bands such as The Brass Connection (TBC), The Dynasticks and The Trel Tones. He was inducted into the International Polka Association Polka Music Hall of Fame in 2006.

Mike Matousek, from the Baltimore, MD area, is the leader of Charm City Sound, a band he co-founded in 1997. He also helped form and performed with The Brass Works in the 1970’s and The Boys from Baltimore in the 1980’s who were featured in Paramount’s major motion picture, “He Said, She Said”. Mike is an accomplished bass player and vocalist who continues to perform with many top polka bands. When not on stage he co-promotes “Polkamotion by the Ocean”, a major East Coast polka festival, and co-hosts “The Mikes Are On!”, an Internet polka variety show. Mike was inducted into the International Polka Association Polka Music Hall of Fame in 2008.

Mike Stapinski, formerly from the Pittsburgh, PA area and now makes his home in Chicago. He is an accomplished player on trumpet, clarinet, guitar and is a vocalist. He has played with such bands as Marion Lush and the White Eagles, The Chicago Push, The Music Company, and Eddie Blazonczyk’s Versatones. Mike has participated in Polka recordings that have been nominated for Grammy awards and he is member of NARAS.

Roger Malinowski resides in the Chicago area, and is one of the early leaders in contemporary Polka drumming. He has played with many bands including Eddie Blazonczyk’s Versatones, The Tones, and The Good Times Band.