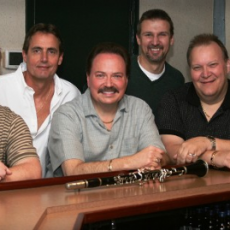 The Maestro’s Men have been performing together since 1996.  The musicians’ unique backgrounds and experience form the heart of the Maestro’s Men sound. Their unique sound and arrangements of traditional and original music offer an exciting and entertaining musical variety.

Their CD “Strike Up The Band” 2003 was nominated for a Grammy as part of the 46’th Annual Grammy Awards in Los Angeles California. The band was honored at this prestigious event in Los Angeles.

The band’s cd “Decade” was awarded “Favorite CD” of 2006 by the International Polka Association of Chicago, IL.

The band’s cd “Don’t Stop The Music” was awarded “Favorite CD” and “Favorite Song” of 2009 by the International Polka Association of Chicago, IL.

The group has received numerous rave written reviews and was voted “Band Of The Year” by W.A.R.E. radio. Their recording release with feature song “Hooray For The N.Y. Yankees” has received recognition from major newspapers including the Connecticut Post and New Haven Register.

The band has performed at dances, festivals, Oktoberfests, weddings, anniversaries, town concerts, formal balls, Polka masses, birthday parties and for just about every type of event.