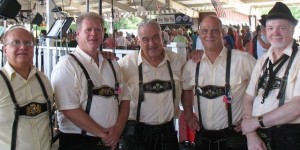 Walt Groller was born in Allentown, Pennsylvania on February 12, 1931.  His parents were Austrian immigrants.  At four years of age, they bought him a small accordion.  He was a self taught musician who picked up the Austrian folk songs his mother sang to him.

After chores on the small family farm were done, he would practice many hours everyday.  He was hired for his first engagement at age twelve, and at fourteen, Walt formed an orchestra.  They performed at country hotels, shuffleboard meets, and parties.  Through these affairs, the orchestra became more popular and clubs started to book them for dance nights.

The orchestra did well until 1952, when Walt was inducted into the Armed Services.  He served with the Army Engineers in Korea where he joined the band that toured military bases.  When discharged in 1954, he regrouped his orchestra and began doing live radio broadcasts every Sunday for ten years.

It was then that Stella Records contacted him, and he cut seven albums and several 45s.  One of the LPs, “New Christmas Songs," is now a collector’s item.

Later Walt formed his own Chalet label, and released eleven albums.  His latest, “Thanks To All You People” has several hits, “Say Thank You Dear and Give Her Roses” and “Papa, The Old Accordion Man."

The orchestra travels throughout the country and Walt plays on cruise ships as well as in Europe.  He has performed with the Schrammels in Vienna and other entertainers in Austria, Germany and Switzerland.  He has received many awards for his humanitarian works here and abroad.

He has composed well over 100 songs, many of them polka and waltz melodies.  At present Walt is a host of his own weekly TV show, “Café Internationale," which is aired on Fridays at 8:30 p.m.  The show features ethnic entertainment including Walt and his orchestra, and is in its sixth year enjoying a vast viewing audience.

Walt lives at home with his wife, Marilyn, and son, Joe, the drummer in his dad’s orchestra.  They also have a son, Tom, and a daughter, Anita, both married.

In 1985, the Walt Groller Orchestra celebrated forty years of music, 1945-1985.  Walt has tried to live by his motto:  “Bringing people together through music!”