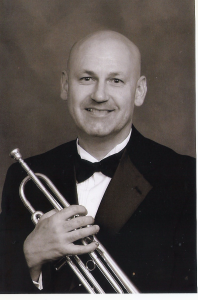 Kevin Adams is an accomplished musician, composer, producer and recording artist, having recorded on Trumpet, Clarinet, Guitar and Piano.  His work is featured on over 40 recordings of which 11 have received Grammy® nominations from the National Academy of Recording Arts & Sciences.  Kevin has been performing polka music across the country for nearly 40 years with numerous nationally touring polka bands including lengthy stints of extensive road work with the band of IPA Hall of Famers Dick Pillar, Eddie Blazonczyk and Lenny Gomulka.  Other bands that he has played or recorded with include IPA Hall of Famers Joe Czerniak and Eddie Skinger as well as the Swinging Brass, Dobosenski Brothers and the Cavaliers, Brass Dimension, Pete Shalins and the Michigan Connection.

Over 30 original compositions are published and licensed by his Buzimuzik Publishing, BMI and have been recorded by other bands as well, such as Polkatown Sound, Toledo Polkamotion, Mark Janson’s Brass Express and Tony Blazonczyk’s New Phaze.

Born in Duluth, Minnesota in 1957, Kevin was introduced to music early on and showed both talent and a love of playing all styles of music.   He played his first jobs as a teenager in 1973 playing with local friends under the name of Polka Country.  Shortly after that, while still in high school, he joined the Dobosenski Brothers & the Cavaliers.  He did his first professional recording with them.  He studied music at the University of Minnesota-Duluth and formed his own band, The Polish Express.  During that time he also played with Joe Czerniak’s Polka Dots.

He moved to New England to continue his music studies and while living there played and recorded an album with the Swinging Brass, which featured 3 of his original songs.  He was offered a job to play with Dick Pillar’s Polkabration Band, which allowed him to develop as a songwriter and arranger.  This was Kevin’s first exposure on the national scene, as Dick and the band traveled fairly extensively at that time.  He recorded 4 albums with the band, and also recorded albums at that time with Pete Shallins and Eddie Skinger.

In 1987, he accepted a job with Eddie Blazonczyk’s Versatones playing with him for 7 years, averaging nearly 200 dates per year all over the country.  He was Eddie’s primary back-up vocalist and continued writing and arranging while recording on many Versatone recording sessions.  He then took a break from touring, got married and moved to Cleveland.  In the next few years, he performed with the Michigan Connection and recorded several more of his original tunes with them.  In 1996 he produced one of the most beautiful recordings of Polish Kolendy on the market:  “A Child Is Born”.  He arranged and played all the music and narrated the story of Christmas throughout.  It was well-received nationally by the Polish American community.  An offer came from Lenny Gomulka in 1998 to join his band and he proudly accepted.  In his tenure with Chicago Push, he has recorded 5 more albums and continues to serve as Lenny’s trumpeter and harmony vocalist on selected dates throughout the country.

From the late 70’s to the present day he has been entertaining polka fans.  His musical travels have led him to appearances at virtually every major polka festival, having appeared in 27 states and 6 countries.  He is a consummate musician, is well-respected by his fellow musicians and is one of the most highly sought after trumpet players in the industry today.  He still maintains a heavy playing schedule on the road as well as locally.

His hobbies include video editing and production, and he has found a way of incorporating it into the promotion of polka music.  His six-part tribute to his friend and fellow Versatone Jerry Darlak is popular on YouTube.  His touching memorial tribute to bandleader Eddie Blazonczyk: “Saying Goodbye” was recently awarded the Best Polka Video of 2012 by the United States Polka Association.  He also created a short promotional piece for Lenny Gomulka to help promote his latest recording “Save The Music”.  These video pieces have been viewed by thousands online extending the reach of polka music.

Kevin has taught trumpet privately for many years and can also be seen volunteering at Christmas time for the Salvation Army.  You’ll see him playing the trumpet or ringing the bell beside a red kettle.  Kevin is a Lifetime Member of the International Polka Association.   He is employed by a major firm in the financial services industry and lives with his wife Barbara in the Cleveland, Ohio area.