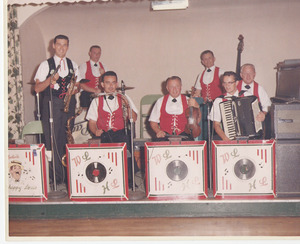 Happy Louie was born August 4, 1934 in Ware, Massachusetts.  His mother is Polish and living.  His father was French, and is deceased.

At the age of nine, he played his first note on a Bugle and then changed to a B-flat Trumpet and has kept it up ever since.  Happy Louie attended the eight grades of St. Mary’s Polish Grammar School in Ware, where he was taught to write and speak the Polish language.  In fact, his dad, for being French, living among Polish people, had a beautiful Polish vocabulary.

Because of his love for Polish music, he was asked by many musicians to play, even at the age of thirteen.  When Happy Louie reached fifteen, he started his own orchestra and played for weddings, showers and other social functions.  He played for the St. Mary’s Drum Corps of Ware.  While playing, he augmented his musical education, arranging and playing at the Berklee School of Music, in Boston, Massachusetts, from which he graduated in 1956.

In the fall, he entered the U.S. Army and was stationed at Ft. Dixon, New Jersey.  After completing basic training, he auditioned and was selected to play during his remaining tour of duty with the United States Military Band at West Point, New York.  During this time, Happy Louie married Julcia Midura.

After his discharge, Happy Louie’s orchestra began to play on a larger scale, backed by the Polka Sweethearts (Jack and Sophie Midura) of Radio Station WREB of Holyoke, Massachusetts.  They were signed to play numerous engagements in Massachusetts, Connecticut, New York, New Jersey, and radio and television.

Happy Louie and his musicians received another break when they recorded three Polish albums in less than a year and later recorded three more albums for Rex Records.  Around 1965, Julcia joined the band and has been traveling with Louie ever since.

It was indeed a thrill, when Happy Louie received a call from Metro Goldwyn Mayer (MGM) of New York.  He recorded four albums for MGM.  He now has his own company, Ha-Lo Enterprises, Inc., with 31 albums available on Ha-Lo Records.  One of Happy Louie’s MGM recordings, “Accordion A Go-Go” was used in the movie:  “The Subject Was Roses” with Patricia Neal.  This recording was written by Richie Woloss and arranged by Happy Louie.  “Love and Peace” on Ha-Lo was a big seller, it explains how Louie feels about Polish jokes.

Happy Louie, Julcia and the band appeared at New York State Fair in Syracuse, in 1968 for the entire week with other top billings as the Four Saints, the Lennon Sisters and the Grand Ole Opry.  Repeat dates at the fair were also in 1974 and 1981.

They received numerous plaques and awards throughout the years.