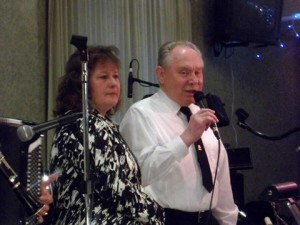 The gifted Eddie Skinger has always been clear about his commitment to his vocation.  Over the past 62 years, he has become an accomplished and respected vocalist, musician, arranger and composer.  His talent and ability shine through his music and can easily be considered as one of the bright lights within the Polka Industry.

Eddie has become affectionately known as “The Platinum Voice” of Polkas.  His smooth style of delivery and mastery of the Polish language has earned him accolades throughout the Polka World.  Eddie has dedicated himself to the Polka Industry and has proven to be one of the finest vocalists and musicians.

Eddie’s credits include a recording on many labels including RCA, Sesac, Dana, Steljo, Windsor, Starr, and Sunshine.  He has written and arranged for Ray Henry, Dick Pillar, Dennis Polisky and The Maestro Men, Polka Family along with his own orchestra.  Some of his many original compositions include "From Me To You Polka," “Move It Oberek," “My Mother Waltz" and “Who’s There Polka."

He has had affiliations with numerous organizations, such as the American Federation of Musicians, BMI, NARAS, Polka Music Clubs United, United Polka Boosters, United Polka Association and the International Polka Association, serving as the MC for the 1993 Awards Banquet.  He has also held the position of the Clerk of the Zoning Board, as well as being the former Alderman, in New Britain, Connecticut.  In addition, Eddie Skinger has been involved with the American Federation of Teachers, International Association of Machinists, Pulaski Democratic Club, New Britain, Connecticut.  He has also served as Communicant of St. Patrick’s Cathedral, Norwich, Connecticut, Foreign Student Exchange Coordinator and in the U.S. Army.