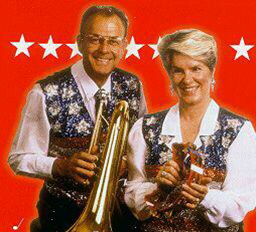 Two words that are virtually synonymous to thousands of fans throughout the country are "polka" and "Pillar," like celery and salt they were made for each other.  Born 34 years ago to Joseph and Stella Pillar Pillar of Uncasville, Connecticut, Richard has been setting toes a-tapping since 1958 when he formed his first orchestra, performing at school dances, weddings, and private parties.  But fame arrived on supersonic wings and the band was soon on the road, appearing throughout New England, the Middle Atlantic States and the Midwest, as well as Canada and Florida.

Educated at Norwich Free Academy in Norwich, Connecticut, and at Mitchell College in new London, he also attended the Hartt College of Music in Hartford.  He plays trumpet, flugelhorn, trombone, baritone horn, tuba, guitar, and banjo.  But beyond that, Dick is a talented impresario who knows what the polka-loving public wants and gives it to them.  Witness the success of his Polkabration – "the greatest Polka Show on Earth" – an event that annually draws thousands to New London, Connecticut’s Ocean Beach Park.  Polkabration grew from a one-day affair in 1965, to an eleven-day affair in 1974 featuring 36 bands.

Witness too, the success of Steljo Records, the "prestige polka label." Dick is president of the firm and in charge of the record division while his father is vice-president heading the tape division.

Dick Pillar and his golden sound orchestra presents the versatility and energetic style of polka music that is listenable as well as danceable for audiences of all ages and nationalities.  Much of his musical success is related to his ability to personally communicate with every member of his audience.  At all of the Pillar engagements the audiences are encouraged to “get into the act” by means of the now famous Dick Pillar request cards.  The Pillar orchestra has four albums to their credit on the Steljo label.

Then there’s the Sunday radio show on WSUB, Groton, Connecticut which Dick co-hosts with his wife, Adele (they were wed in August 1970).  Dick is also a music teacher, booking agent, promoter and producer of various types of entertainment extravaganzas.

Dick readily admits that Walt Solek was among the first to inspire him to a career in music.  It is most fitting, therefore, that both of these fine talents be recognized by admission on the same day to the Polka Music Hall of Fame.