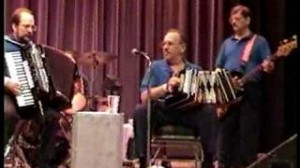 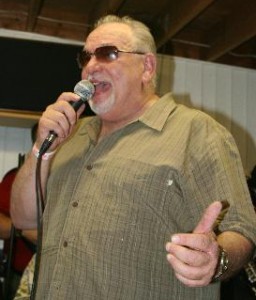 An explosive entertainer, polka dynamite, and charged with TNT describes one of the 1994 Polka Music Hall of Fames inductees. Born on the Fourth of July and growing up on the East Side of Buffalo, known as the city's Polonia, "Scrubby" was exposed to polka music at a very early age.

When he was six he started to play the accordion, first by ear, then with formal lessons. Later in his early teens, he went to see Li'l Wally perform. He was in awe with the performance he had given to the crowd at a local dance, his vocals and concertina and the Chicago style of music was something to which he had taken affection. At age sixteen, he started to play the concertina, and that has been his main instrument for over thirty years.

Back in 1965, Scrubby formed his own band known as the Dave Seweryniak Trio. In 1968 he was introduced to Larry Trojak, who at the time was the leader of Buffalo's Casino's. That same year, Scrubby joined Larry's band and the name was changed to Larry Trojak's Dynatones. In 1970, Larry was called to the service, and Scrubby took over leadership of the band and led the band for 20 years.

Throughout his polka career, Scrubby & The Dynatones have won numerous awards from The IPA, USPA, Disc-Jockey's and others to name a few. Scrubby has been decorated with many male vocalists awards through the years. In 1992 their album entitled "When the Band Plays a Polka" was nominated by NARAS to receive the prestigious Grammy Award. For a brief period of time (1985-87), Scrubby was a member of the Sunshine Polka Band. The group has recorded several albums.

His performances on stage from the donning of a muumuu, to a Dracula Cape have been unequaled by anyone in the polka field. Scrubby credits Liberace with his costume antics on stage, remarking "Let me slip into something a little more comfortable." His love for polka music not only consisted of playing and singing, but also to help form the Buffalo Polka Boosters, which celebrated 25 years in 1995.

In addition, he has always been active in the promotion of, and willing to lend a helping hand to, many in the industry. His wish is to continue to make contributions to the polka industry, either by performing on stage or behind the scenes. He also hopes to expose more and more younger people into the wonderful world of polka music, either by becoming musicians or promoting polkas as an enthusiastic way of life.

In August, 1994, his buddy, Larry Trojak ,and many of his friends and family from the Buffalo area were on hand to see the one, the only, "'Scrubby" inducted into polka music's elite group. The International Polka Association's Polka Music Hall of Fame welcomed its newest member, Dave "Scrubby" Seweryniak.