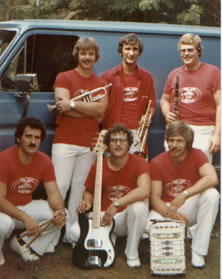 Bruno’s singing career began early.  He learned to sing the “Two Bucks Polka” at the age of five as he heard the song played on the Oskierko Polka Show over WJOB Radio in Hammond, Indiana.

During his grammar schools days he tried to play the accordion.  He did not care for this instrument and his interest switched to the trumpet.  He attended the Roseland Conservatory of Music and got instruction from a private teacher, Al Schonecker.  During the high school days, he played the trumpet and herald trumpet with the Jazz, Concert, Dance and Marching Bands.

In 1962, he joined a local band, the Polka Jacks.  In 1963, he became a member of the Chicago Federation of Musicians Local 10-208.  He then joined the Ted Bonk Band and did remote radio broadcasts over WOPA & WJOB.  It was then he joined the Li’l Wally Band and played across the country in Massachusetts, New Jersey, New York, Connecticut, Rhode Island, Maryland, Pennsylvania, Vermont, West Virginia, Michigan, Ohio, Indiana, Illinois, Iowa, Wisconsin, Nebraska, Minnesota and Virginia.  Some great events were at the Toronto Canadian Expo backing Bobby Vinton, and the Palmer House in Chicago for the Music Operators of America, with Tony Bennett, Rosemary Clooney, Boots Randolph, etc…

In 1966 he as inducted into the Army and shipped to Germany.  He played there for the Polish Concern for Displaced People.  On furlough back home, he married Sue Kovalick, both returning to Germany for the duration of his hitch.  Upon discharge, returning to Chicago, he played with Li’l Wally, Tom Altenburg, Casey Homel, Richard Gomulka, Li’l Richard and others.

Settling in Ohio, Bruno formed his own band, the Harmony Stars in 1974.  His first album gave him national recognition.  A fan club was established in his honor in Ohio. For 3 ½ years he did the “Weekend Polka Party” over WHHH Radio, Warren, Ohio.  He then worked on WKTL in Struthers, Ohio.  He appeared on the “Polka Variety Show”, Channel 5 in Cleveland.  His popularity has even traveled to Alaska where his records have been played.

As owner of Bem Star Records, a publishing and record company, he has started out bands such as Holy Toledo Polka Stars, the Dynasonics, the Troubadours, Judy & Her Suchey Brothers.  He wrote songs like “Back To Chicago," "Hey Pretty Girl," "Lost Love," "Honky Tonky Polka," "Can’t Get Married," and others.  He received recognition as "No. 1 Band" in Battle of the Bands mail requests  sponsored by Al Mann on WTAQ in 1976; No. 1 Band in the Battle of the Bands sponsored by Larry Walk in Idora Park, Youngstown, Ohio in 1976; the USPA’s favorite album “People Pleasing Polkas” in 1979; Outstanding Polka Achievement Award, USPA 1982.  He received certificates from Jerry Lewis for services for MSD and played for many benefits in the Cleveland Area.