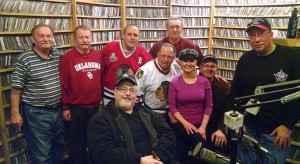 Billy Belina has spent a major part of his life playing and promoting polka music. Born in New Bedford, Massachusetts in 1947, Billy has his parents to thank for much of his success in the polka industry. In his early years, Billy often joined his parents on the two-hour drive to Connecticut to watch the local polka bands. He endeared himself to accordion greats such as Ray Henry and Al Soyka and soon desired to try the instrument on his own. At the age of eight, Billy convinced his parents to buy him his first accordion and sign him up for lessons. By his mid-teens, Billy's practice and dedication began to pay off as he started a band of his own, known as the BelAirs.

Several years later, Billy's accordion playing and vocal ability caught the attention of Rhode Island bandleader Wesoly Bolek and Billy began playing with Bolek throughout New England. By this time, Billy had taught himself trumpet, piano, drums and bass guitar and started filling in with other top Polka bands in places as far away as Buffalo and Chicago. His heart stayed close to New England though, and in the early seventies, he jumped at the opportunity to join The New Brass. Billy appeared on two New Brass albums and made an immediate impact, writing a handful of songs including Everybody Love Somebody Sometime and Dance a Happy Polka. In the mid-seventies, Billy and his wife Jean relocated to Easthampton, Massachusetts hoping to start a family (sons Bill Jr. and Kevin would soon follow). This decision forced Billy to change bands, and he spent the next few years playing bass guitar and singing with Heavy Chicago. Billy appeared on three Heavy Chicago albums and penned another nine songs. He helped Heavy Chicago build national recognition until the group disbanded in 1981.

The break-up presented Billy with the opportunity to start his own band, the Bay State IV. It was with the Bay State IV that Billy began playing the Cordovox accordion he continues to play today (an accordion with an electric bass left-hand). He led the Bay State IV for over ten years, recording four albums and performing across the country. His most notable achievements with the Bay State IV include the Bay State IV Salutes the Polka Stars album and a 1988 performance at the Smithsonian Folklife Festival in Washington, D.C. In addition, his original song, Slippery Fingers Oberek, appeared on the Rhino Records compilation Legends of Accordion. In the early nineties, Billy added a fifth man to the group, which forced a name change to Billy Belina and Bay State. For the last ten years, Bay State has played a light schedule across the northeast, which has allowed Billy to focus his attention on promoting Polkas in other ways.

Since 1979, Billy has been a fixture on WMUA, the non-profit student radio station at the University of Massachusetts in Amherst, Massachusetts (he has worked in housing services at the university for the same amount of time).

With the help of the internet, his Saturday morning Polka show has garnered thousands of listeners nationwide and his annual Polkathon fundraiser has helped provide the radio station with the necessary funds to stay in operation.

In addition to his radio work, Billy has organized a series of Polka album trade shows over the past few years, hoping to provide an outlet for fans and collectors alike to share the music they love.

Whether on the radio, at a trade show or at a Polka dance, Billy willingly shares his vast knowledge of Polka music with anyone who will lend an ear. He leaves no doubt that he is one of Polka music's greatest historians and is a true asset to the Polka industry.