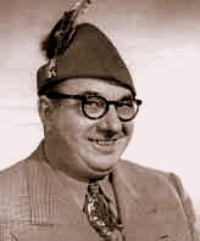 John Anthony Wilfahrt, better known as “Whoopee John” Wilfahrt, was born in 1893 on a farm near New Ulm, Minnesota.  His grandparents, Joseph Wilfahrt and Franzeska Hauser, migrated to America in March, 1867, with three of their children and settled on  a farm in Sigel Township, a few miles from New Ulm. The family came from the small village of Swarzach located in the Bohemian Forest of western Bohemia., then part of Austria. Whoopee’s father was born in 1871 in Sigel, eventually marrying Barbara Portner, whose family also originated in the Böhmerwald, for whom Whoopee named his well known “Barbara Polka.” It was his mother who taught him the folksong that later became his famous theme song, the “Mariechen Waltz.”

Whoopee was born on the farm in Sigel, just as his father before him, in 1893. When he was 10 years old, his mother purchased a small accordion for Christmas at a cost of $1.50 and he began practicing his music in the family’s grain bin. His first job was solo performed for a party, after which he  played for weddings and anniversaries.

At age 18, he, his brother, Eddie, on clarinet, and a cousin, Edwin Kretsch on trumpet formed a trio, called the Böhmish Dorf Kapelle [Bohemian Village Band], and played at weddings, dances, and socials.  At first they had to walk five miles to play a dance.  They would tie their instruments to a broom handle and carry the stick to ease the load.  Later they used a wagon.  His earliest bands were almost exclusively composed of extended family members.

In 1914 he moved from the farm and married.  He formed a band of 10 or 11 pieces. In Swedish communities the band played Swedish tuned; around New Ulm and Mankato it was German and Austrian; at Green Isle, Irish music was played; around Cumberland, Wisconsin they played Italian music.

In 1924 the band became a regular on several radio stations in the Twin Cities.  They moved to St. Paul and played Saturday nights at the American House in St. Paul for twenty-two years and for nine of the same years played Monday nights at the Marigold Ballroom in Minneapolis.

By 1926 they had recorded on Okeh, Columbia and Brunswick.  In 1934 the Kapp brothers, Dave and Jack, formed Decca.  The first one signed up was Bing Crosby, the second was “Whoopee John”.  John recorded about 200  for Decca.  The best sellers on Decca were “Mariechen Waltz” and “Clarinet Polka”.  He carried a library of over 1000 special arrangements which ran into the $50,000 bracket.  In all he recorded about 1000 records.

There are many stories as to how he received his nickname. The most probable is that John often added to the spirit of the music by shouting “Whoo, Whoo, Whoo,” a practice carried on by bands and dance groups  in Austria and Bohemia to this day.

In 1954 and 1955 he reigned as leading polka band in the nation by Downbeat Poll from the National Ballroom Operators Association.  “Whoopee John” is considered the founder of the New Ulm school of old time music.  When he died of a heart attack at age 68 in 1961, this ended his life, but not the memories of “Whoopee John” Wilfahrt and his band.