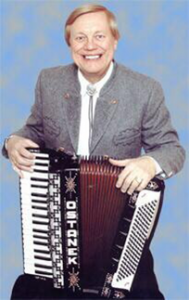 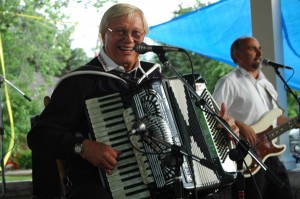 Ladislav John Ostanek was born of Yugoslavian parents on April 20, in Duperquet, Quebec, an only child.  When he was five years old, his family moved to the St. Catharines area.  At the age of nine, Walter began playing the Button Diatonic accordion.  Without formal training, he progressed at a remarkable rate.  When he was twelve years old, Walter received his first piano accordion.  Four years later, in 1951, Walter Ostanek formed his first Country and Western-Polka Band.  After two years, he joined with Abbie Andrews & his Canadian Ranch Boys working on their radio show three times weekly.  At the age of twenty-one, Walter once again formed his own group.

On Saturday, January 26, 1957, this new band played its first engagement at the German Village in Niagara Falls, Ontario.  After thirteen years of study, hard work and dedication, the Walter Ostanek Band was now a reality.

The title, Canada’s Polka King, is not just a name.  When the Walter Ostanek Band appears in public, they always do their best to please and keep their audience happy.  Through this kind of dedication, Walter has accomplished many memorable steps.

For ten years, he had a weekly Radio Show on CHOW Radio in Welland, Ontario.  His own TV Show “Polka Party” appeared weekly on CHCH TV, Channel 11, Hamilton, Ontario for four years.  At present, Walter has a “Polka Show” CKTB 610 AM on your dial every Saturday night, 5:15-7:00pm, a Fiddle Country Show Saturdays 7:00-8:00pm, CJQR 97.7 FM, radio dial, in St. Catharines, Ontario.

Since his first LP album, “Gay Continental Dance Party” recorded in 1963, Walter has recorded many albums and numerous singles.  In 1974, Walter received a Gold Record from Arc Record Co. as presented by “America’s Polka King”, Frankie Yankovic.  Walter received a Plaque from “Polka TV Variety Show”, Cleveland, Ohio, for dedicated work in the polka field.  Walter appeared as a guest with Frankie Yankovic on the Johnny Carson Show, also on the Phil Donohue Show, along with Lawrence Welk, in March 1975, and in 1977, he was on the Don Ho Show at the Polynesian Palace in Honolulu, Hawaii.  In March 1979, Walter received a Silver Award, 2nd prize for a one-hour Christmas Special.  Two hundred independent TV Stations in Canada participated in this event.  In August 1979, he toured Yugoslavia, Italy, and Austria with son, Richard, and Frankie Yankovic.  This past year, Walter appeared with such artists as Roy Clark, Freddie Hart, Ronnie Milsap, Oakridge Boys and other notables.

Walter appeared on the SS Vera Cruz for a week in 1983, along with fifteen All Time Polka Great Bandleaders.  Walter also appeared in 1981 for one week on the S.S. Norway, the largest cruise ship in the world, leaving Miami, Florida.

Walter was honored in Cleveland, Ohio in 1982 for his 25 years as a Band Leader and for Promotion of Polka Music.