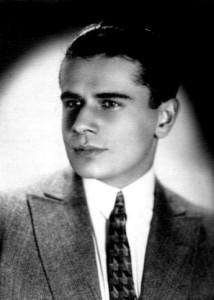 Walter Dana – Wladyslaw Dan Danilowski – a resident of Miami Beach, Florida, was born in Warsaw, Poland.  He began playing piano and composing at the age of seven.  His musical education was obtained at the Warsaw Conservatory and Paris.  He received a law diploma at the Warsaw University.  He worked as press attaché at the Polish Foreign Office and also as an accompanist and musical illustrator with the “Qui Pro Quo” Theatre.  He was the founder conductor and coach of the popular vocal quintet “Chor Dana” making records, films, radio and public concerts all over Europe, and in 1936-38 two concert tours in U.S.

Dana wrote many scores and songs for films in Poland, Czechoslovakia and Italy, was director of the light music department of the Polish Radio Network and director of the Tip Top Theatre for which he received decorations of the Polish Gold Cross of Merit from President Moscicki, and the Royal Diamond Pin with Crown from Italy’s Queen.

The war in 1939 changed everything.  He managed to escape Poland and came to the U.S. in 1940 with his wife, stage star Niusia Nobosowna and son Gustav.

In the U.S. Dana organized an American “Chor Dana” and worked for the Polish Radio in New York and Detroit.  Then in 1946, exactly 25 years ago, he formed Dana Records which became the top Polish-Polka line within a short time.  In 1952 a poll by Billboard Magazine ranked Dana Records behind Victor and Columbia and ahead of Decca, Capitol, Mercury and all others.  Through records Walter Dana introduced such great polka artists as Frank Wojnarowski, Ray Henry, Gene Wisniewski, Johnny Bomba, etc. …  He also recorded successfully such artists as Bernie Witkowski, Eddie Zima, Steve Adamczyk, Johnny Pecon, Regina Kujawa, Marisha Data and many, many others.

In 1950 ill health forced him to sell his business interest in Dana Records and he moved to Florida where he has been doing some serious composing for the Miami Beach Symphony.  In 1969 he wrote a symphonic suite, “Florida Sketches,” which was performed in 1970; “The Wailing Wall,” played on piano with orchestra in 1971; “Jazz Symphony,” “Ora Pro Nobis,” etc…

In 1971, at the time of his induction into the Polka Hall of Fame, Walter Dana intended to finish his Second Symphony and release over 100 some LPs in stereo as a subsidiary of Roulette Records.