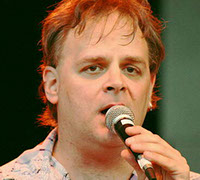 Wally Dombrowski’s journey into music began when he started taking trumpet lessons at five years of age. Once he got the basics of the instrument down, it was evident that he could play by ear and would play along with recordings at home without the aid of any written music. His perfect pitch assisted him in teaching himself how to play concertina at the age of six. At the age of nine, Wally’s brother Rich organized the Polka Country Musicians and the band started performing at local functions around Connecticut in September, 1977.

Along the way, Wally also took piano lessons, but used his ear and innate God-given musical gift to teach himself other instruments. As the popularity of the Polka Country Musicians grew throughout New England and the northeastern United States, Wally was featured not only on concertina and trumpet, but eventually on bass, drums, violin and clarinet.

As his musical prowess grew, Wally began handling the arranging of music for the band, as well as co-writing songs with his brother. The band’s popularity slowly, but surely, grew with the release of their first three recordings over a five-year period.

Wally and the Polka Country Musicians got their first “big break” when they were asked to record on the WRS label out of Cleveland, Ohio in the late 1980s. This yielded two highly successful recordings that took the band from regional popularity to the national state with their unique style that now combined polka music with an influence of country music. During this time, Wally expanded his horizons and began writing his own songs that appeared on those two recordings. The band’s “overnight success” (which was about 16 years in the making) reached its culmination with the release of the “Live-… And Jam” recording, which was recorded live in Cleveland, Ohio

over a two-day period.

At one of their high points of popularity, the Polka Country Musicians disbanded at the end of 1997 due to various commitments that took a few members away from the band. For the next two years, talk continued about the band and how greatly it was missed in the polka field. Recognizing the vacuum that had been left, Wally reformed the Polka Country Musicians in the year 2000. This resulted in the band performing a few reunion dates at major festivals across the country. This set the trend for other disbanded popular polka bands over the next several years to do the same. What was supposed to be just a few reunion dates eventually turned into something more permanent as demand to see the band play more frequently grew and by 2003 the Polka Country Musicians were once again a major fixture in the polka field.

In addition to being a musician, vocalist, music arranger, bandleader, songwriter and music publisher, Wally has appeared on 18 recordings with the Polka Country Musicians and two solo recordings, as well as other recordings by Eddie Blazonczyk’s Versatones, Stas Bulanda, The Brass Connection and the Polkas For Charity recording, the proceeds of which were donated to St. Jude’s Children’s Hospital.

Starting in 2008, Wally decided to expand his horizons further by getting involved in music production and handling the responsibilities of recording producer, as well as recording and mixing engineer for his second solo recording and subsequent recordings by the Polka Country Musicians.

Wally’s passion for music knows no bounds by fusing influences from other forms of music, such as country and classic rock. He acknowledges the roots of Polish polka music from yesterday and bridges it to today with an eye on advancing the music into tomorrow.