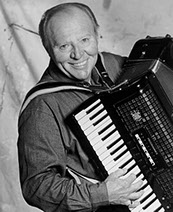 The musical story of Verne Meisner began in 1949 when Verne, at the age of eleven, received his first accordion and twelve lessons.  Verne attended dances and listened to the music of Frank Yankovic and the Six Fat Dutchmen on his wind up phonograph.  In a few months Verne was playing songs by ear with amazing accuracy.  In 1950 the first band was formed playing for relatives, neighbors, school functions and weddings. 1957 was a big year because Verne Meisner and the Polka Boys made their recording debut on the Paragon Label with two original songs composed by Verne, “Memories of Vienna Waltz” and “Polka Dancers Polka.” (It has been said that one of Johnny Pecon’s favorite waltzes was “Memories of Vienna”.) After getting exposure on the Fritz the Plumber Radio Show, Verne gained instant recognition in and around Milwaukee.  Then the second record, “The 400 Polka and Waltzing in Vienna” (also originals) was released.  The band’s success continued into 1959 with yet another release, “Pretty Polly and Till I Return”.  After Verne’s tour of duty in 1962, he recorded his first LP on Cuca Records entitled, “A Polka and Waltz Holiday,” which received a five star rating on the Billboard Charts.  Since then Verne has recorded twenty-eight different 45s and fifteen LPs, a recording career that has lasted thirty years.

Verne has devoted his entire life to music performing successfully throughout the United States, Hawaii, Canada and Europe.  If you are familiar with the Meisner sound, you will notice the European flavor that is traditional to Verne’s unique style.  The flavor of the old country is there but with a “spark” not heard in other bands.  This perfection of rhythm never becomes monotonous.

George Mlay, a successful eastern radio personality always said, “No one can play a waltz like Meisner.”  Furthermore, Verne is considered the Waltz King in many  polka loving areas.  He has collaborated with many writers such as Joe Di Cimber, who wrote “Those Magnificent Men and Their Flying Machines.”  And rumor has it that Verne was asked to play the musical score for the movie of the same name.

Verne Meisner was born in 1938 and passed away on June 10, 2005. Another biography may be found at http://www.polkas.com/vernemeisner .