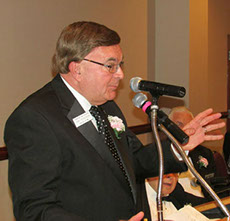 Tony Petkovsek was born August 21, 1941, in Cleveland, Ohio to parents of Slovenian descent. At age 20 he began what would become the longest running daily two hour polka program, self-produced with his own sponsors. That daily show aired six days a week from 1961 through 2011 and it now continues weekly every Saturday for three hours from noon to 3:00 p.m. Co-hosts currently include Joey Tomsick, Joe Valencia (bilingual also in Slovenian), Denny Bucar and Patty Sluga. He broadcasts from his own home studio in Fairport Harbor on the shores of Lake Erie over WELW-1330AM where he is co-owner, and on the internet at 24/7polkaheaven.com.

Petkovsek began originating and promoting polka tours and cruises to virtually the entire world including even Australia with polka bands and artists and a special emphasis in the European Alpine countries of Austria, Germany, Switzer-land, Italy and of course Slovenia, the country of his ancestry.

He became a partner with Kollander World Travel, based on the east side of Cleveland and this year marking 90 years of business. Tony has spent about 45 years at the agency and currently is a consultant. His total travels besides Europe and Australia have included the exotic places like Hawaii, the Caribbean, Mexico and South America, earning him the title of “Polka Ambassador.”

This year, 2013, marks 50 years since a Thanksgiving Polka Party has been in existence. Since 1990, the event has been downtown at the leading, first class, Marriott Hotel, in which the 25-story, 400 room hotel is filled to capacity. Patrons have come from over 25 states, all of Canada, and even Europe like the Netherlands and Slovenia. Fifteen to twenty Cleveland-Slovenian bands perform non-stop, around the clock on the weekend.

Twenty six years ago a National Cleveland-Style (Slovenian) Polka Hall of Fame in Euclid was founded by Tony Petkovsek and a group of dedicated volunteer directors. The museum is supported by the only full time record shop selling all of the latest in polka CDs, DVDs and souvenir gift items. Tony continues as Chairman Emeritus with Joe Valencic as President.

Tony is the recipient of numerous, over 100, awards and proclamations for his 52 years of promotional work in the polka field. Topping the list for 2013 is the International Polka Music Hall of Fame, based in Chicago, and it’s Pioneer Award