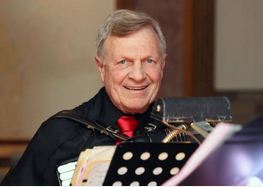 The back story on the Krew Brothers Band is that it was established in 1958 as a three-piece combo with members Tony, Don, and Gary. The year was 1967 when Allen and Dennis joined the group, and just two years later, the band recorded its first album. “A Lively Polka Session.” It did not take long for the band to be recognized in the polka community, as the bookings were coming in from all across the country. Ken and Rick joined the band in the early ’70s. The Krew Brothers were the only all brother band at that time playing the major polka conventions. Tony Jankowski’s “Erie Days” In Erie, PA., “Bel-Aire Days” (youtube video, Krew Bros. Bel-Aire polka days”) in Chicago, IL, Dick Pillar’s “Polkabration” in New London, CT, the “IPA Convention” in Milwaukee, WI along with many other stops in countless cities and states like Ludlow, MA, Port Washington, LI, NY, Detroit, MI, Easton, PA. Dover, NJ, and various stops in Canada. Three more albums would follow: “Krew Brothers mix It Up,” “Polka Recipe,” and “Yes, We Are All Brothers.” Tony was the main reason why the Krew Brothers band was so successful as he was responsible for writing, arranging, and organizing rehearsals along with managing and booking the All Brother band. When playing these polka dances and conventions, I would be amazed how Tony would always take the time during breaks to go to each table to talk and thank the people for coming out in support of the Krew Brothers.

The Krew Brothers band had the opportunity over the years to perform with all the polka greats: Walt Solek, The Boys, The Polka Family, John Gora, Eddie Blazonczyk, Marion Lush, Freddy K, The New Brass, Dick pillar, Jimmy Sturr, Happy Louie, the Dynatones, The G-Notes, and the list goes on.

In addition to the contributions Tony has made to the polka industry, I think it is also worth mentioning the type of character Tony possesses needs to be conveyed to the committee to understand why he is an asset to his Polish heritage and should be recognized in the IPA Polka Music Hall of Fame. Understanding Tony’s great character has much to do with a life story that was never really made known to many. In the year 1966, June 17 to be exact, the Krupski family lost their mother at the young age of 46 due to an aneurysm in her brain, leaving behind seven sons. The youngest, Rick, was just six years old. Our dad, who deeply loved his wife of 27 years, did not take her death well and sometimes struggled with the loss. It was Tony who managed to keep the family together through music education even though he was married only eight months at the time of her death, and he and his new wife Marie were expecting their first child two months later. It was Tony who went to our school and checked to make sure our grades were up. It was Tony who called every day to make sure we practiced our instruments for an hour every day. It was Tony who made sure there was enough food in the house. It was Tony who took us shopping for clothes and took us to the dentist. On a personal note, it was Tony who found the time to drive me into the Buffalo every Tuesday for two years to study with the principal trumpeter in the Buffalo Philharmonic. If that wasn’t enough, would you believe he also worked two full-time jobs? (stationary engineer for both Rich Products and the Good Shepherd Sisters Home for Young Women) Tony was also a member of the Army National Guard.

Recently, the Krew Brothers reunited for a performance in Wyandotte, Mi, in April 2015 for the Lisa Biskup Memorial benefit dance. Tony came up with the idea to put together a Krew Brothers’ Greatest Hits CD with 100% of the proceeds going towards the memorial fund, which raised an additional $800. Every year, Tony is asked to perform as the locally famous “Broadway Market” during the Easter holidays, where thousands of people of Polish heritage visit to buy their Polish delicacies. Tony also performs each year at the Owl polka family picnic in Williamsville, NY, along with many local bands, and the proceeds go to “Camp Good Days.” “Helping Hands” and “Wings of Hope.” Tony volunteered weekly at the “Community Action Information Center’s Food Pantry.”

I would also like to add that on November 7, 2015, Tony and Marie celebrated their 50th wedding anniversary. I hope that Tony has succeeded in meeting all the criteria to become a member of the IPA Polka Hall of Fame, but I can tell you this for sure, he has succeeded in setting a high standard for talent, character, and generosity within the Polish community. If you were to ask anyone about his character and the kind of person he is, I’m confident there would only be good things said about this man.