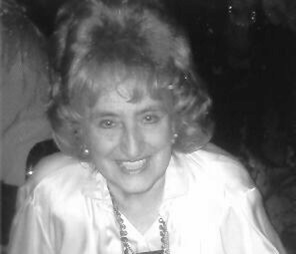 Teresa Zapolska grew up in Jamaica, New York. During her early years in school, she was taught the piano by the nuns and played for all of the Polish shows held at the school. On the request of her mother, she also began singing and accordion lessons.

At an early age, her polka career began with the Bernie Witkowski Orchestra for the grand opening of Polkas on Broadway at the Arcadia Ballroom, for the Kosciuszko Ball in the grand ballroom of the Waldorf Astoria Hotel in New York City, along with many more infamous locations. Not only did she sing with the band, but she also composed and orchestrated polkas and Polish songs.

With this new found popularity, Zapolska at one point was performing with a total of twenty bands. Her extensive career in polka music took her to performing not only with Frank Wojnarowski, but she was a vocalist with such great artists as Bernie Witkowski, Mike Miskiewicz, John Tyburczy, Eddie Gronet, Ted Maksymowicz, Joe Yasinowski, Larry Chesky, Eddie “D” Dmuchowski, Ed Zavaski, Sr., the G.T. Express and many more. Having difficulty switching between bands, she decided to go with just one band. That decision was to perform with Frank Wojnarowski.

Zapolska’s recordings with these artists can be found on the RCA Victor, Musico, Rex, Silverbill, Dana, Rolo, Dyno, Rim, Eurotone and Polka Towne record labels. In 2008 her record label, Polka Towne, was in its 45th year in existence.

Frank Wojnarowski, in the beginning, wasn’t extremely comfortable with Teresa. Within a short time, he grew to becoming very fond of her. Zapolska admits to idolizing Frank and his wonderful music. She wrote many songs for him. He was so impressed with her work, he never questioned any song she gave him. He just used it.

Zapolska teamed with Wojnarowski to run two big polka festivals – one in Manhattan Center in New York City and the other in Bridgeport, Connecticut at Pleasure Beach Ballroom. Not only did she sing, write songs and orchestrate them, she also made the costumes for the band, as well as handled his bookings. Upon Wojnarowski’s retirement in 1975, Teresa began her own band, the Teresa Zapolska Orchestra, then the Teresa Zapolska All Girl Orchestra Plus One.

In 1984, Zapolska decided to take over the Polka Show on Long Island. She has worked with WBAB-WGR in Long Island, New York, for a few years, and became a program engineer and show producer for WUSB in Stony Brook, Long Island. In 2008 she was celebrating her 24th year on radio. When she had some spare time, Zapolska also was a news reporter for the Polish American World in New York.

Some of her accolades include receiving two awards for best female vocalist, as well as two entertainment awards in 2006. She appeared on two television programs in the 1970s, and produced eight more for television syndication. Zapolska formerly was a consultant for Jay Jay records, traveling nationwide visiting distributors, record stores and radio shows. Previously, she held the position of vice president in charge of artists and repertoire for Gateway Industries Recording Studios in Pittsburg, Pennsylvania, and Associated Industries in Cleveland, Ohio, for their Dyno and Rim labels.

Zapolska was the recipient of Cambridge’s Who’s Who Professional of the Year in the Polka Music Industry award in 2006, 2007 and 2008.