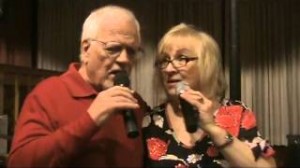 Ted (Thaddeus) Okrzesik was born in Chicago on July 29, 1937, to Joseph Okrzesik and Emily Scieszka Okrzesik. Ted’s dad played the violin and both of his parents enjoyed polka music. His mother said Ted spoke fluent Polish in his early years. Ted was the youngest of three boys. His brothers were Joe and Bob, who also entertained in the polka field. He attended St. Pancratious grammar school and Holy Trinity High School, where he also participated in the school band.

When Ted saw both of his brothers playing instruments it sparked his interest. At the age of 10, he asked his dad for a set of drums and taught himself how to play. Once he began playing, the brothers formed a small “house band” called “The Jolly Three.” His father booked jobs for the young boys to play at various affairs. After some time, the three brothers formed a new polka band called “The Polkaliers.” Joe was the leader, and Ted emceed and performed vocals. They booked jobs at lounges, dances, picnics and weddings. Because of the lack of a steady trumpet player, at age 21 Ted taught himself how to play the trumpet. “The Polkaliers” recorded two albums, although only one was released. The band’s popularity grew and bookings increased.

Ted enjoyed playing music for others, but also enjoyed dancing at various polka functions. He met Genevieve Bocian (Gennie “O”) at a Li’l Wally polka dance and two years later she became his wonderful wife. They continued to enjoy polka music and Ted continued to play with the band.

Ted and Gennie are the proud parents of five great polka children, Teddy, Danny, Teri, Johnny and Cathy. They are also blessed with 17 grandchildren and three great grandchildren. During the first half of their marriage, they decided to open a business that focused on catering and polka music. However, as time went on, polka music became the key attraction. The Omen was opened on July 15, 1972 on Archer and Francisco Avenues in Chicago. It provided a venue for a variety of polka bands along with special events and some delicious food – ooh that chicken and Jo Jo potatoes! The Omen was the polka hotspot in the ‘70s. Polka music was in demand, so much so that bands were scheduled to play on Wednesdays, Fridays, Saturdays and twice on Sundays. There was even a monthly newsletter called “The Omen News” published by Ted and his family. Incidentally, according to Chet Kowalkowski, the Polish Christmas Carolers originated at The Omen one Christmastime with Chet and Stas Bulanda.

Ted’s work with “The Polkaliers” tapered off because his focus now was on his business. However, Wednesday jam sessions provided a venue for many musicians to get together and play polkas at The Omen. It just so happens that out of these jam sessions a new polka band emerged – “The Windy City Brass with Gennie “O”. Ted (second from right) became the leader of this band, which included his wife Gennie “O” on vocals, two of his sons, Teddy and Danny, along with John Furmaniak and the legendary Stas Bulanda. Later on, Ted’s youngest son Johnny also joined the band. All of his sons are self-taught musicians and his daughters are avid polka fans. His sons continue to be polka musicians today, following in their father’s footsteps.

While Ted’s older brother managed The Omen, “The Windy City Brass” traveled across the United States promoting polka music. They recorded four albums. Three of these albums were recorded on Archer Records, which was Ted’s recording label. From this came “The Windy City Polka News,” a newsletter that included information and articles on Chicagoland area polka happenings and also a directory of area polka lounges. “The Windy City Brass” continued to entertain the masses for almost 20 years.

Throughout all of the polka business Ted managed—The Omen, The Windy City Brass, Archer Records, a family, and a home—he still found time to promote the success of the polka field by becoming involved in the following: The Omen polka radio show on Saturday mornings on WTAQ; IPA elector; UPA President; UPA polka radio show (three years); designed the first IPA float for the Polish Constitution Day Parade; Chicago Is A Polka Town four-day weekend polka extravaganza at the Sabre Room; and organized bus trips to various out-of-town polka functions.

Currently Ted continues to promote polka music with his band “The Next Step With Gennie “O,” a three piece band utilizing current technology to provide polka entertainment to all. You can even find them on the Internet at http://www.gennieo.com. The band performed at various public and private functions. Additionally, Ted and Gennie can be found at various polka functions supporting and enjoying the music and the people who have become part of their “polka family.”