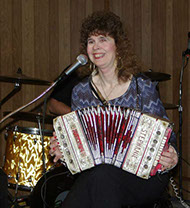 It all started at the age of seven when Stephanie was being taught the accordion by her mom, Wanda, and the Polish vocals by her grandmother, Stephanie. This created an interest in listening to Polish music. While Henry her father was off bowling, Wanda took Stephanie to see Li’l Wally when he was in town. When Stephanie saw Li’l Wally play the concertina and sing “Hello My Kejda,” she was fascinated with this instrument. Stephanie no longer wanted to play the accordion.

Wanda took Stephanie to Chicago to look for a concertina. They went to Jay Jay on Kedzie Avenue. Li’l Wally owned this music store and was showing them some concertinas that were in the store. Stephanie spotted a red one on display in a showcase that she fell in love with. It was the only one that she wanted and Li’l Wally said this one was not for sale because it was the concertina that he played on the Lawrence Welk Show. Because Stephanie would only settle on this one particular concertina Li’l Wally asked Wanda if Stephanie played any instrument. Wanda answered “Yes, she plays the accordion” and Li’l Wally had her play one. Li’l Wally was impressed with how she played and said she will learn the concertina and do very well with it. He ended up letting Wanda purchase that concertina and Stephanie still plays it today.

Marion Lush was playing in Buffalo and Stephanie and her parents went to see him. During the show, Marion was told that Stephanie plays the concertina and Wanda sings with her. He asked them if they would join him on stage. Stephanie’s dad went home and brought the concertina back, and it all began. The crowd automatically crowded the front of the stage and wanted more. Marion took them the next day to Dover, New Jersey, and they were a big success.

As time went on, they started a polka band called Wanda & Stephanie & the Golden Stars. Henry was their driver and set up man for all the equipment. Eddie Blazonczyk heard the girls play and asked them if they would record on Bel-Aire Records. Eddie was the drummer on all the recordings and many other Chicago musicians such as Lenny Gomulka and Eddie Madura. After recording their first album, Eddie asked them to write some original materials. “Come Back My Johnny” was their first hit and many more originals followed. “Lover Oh Lover” became the #1 song and also the IPA Song of the Year. Thirty-six years later, Stephanie received a telephone call from the producers of “Deal Or No Deal” and asked if they could play her song on international and national TV. Many great albums followed. They also won “Best Female Vocalists” in 1973 and 1977 from the IPA.

During their travels in the Pittsburg, Pennsylvania, area, a top local promoter, Joe Fiedor, proclaimed the girls as “America’s Polka Sweethearts.”

In 1980, Henry passed away and Wanda & Stephanie took time off from the music scene. A year later, they decided that traveling would be too hard, so they went back to playing locally in the Buffalo area. They played at Melody Fair with Bobby Vinton several times. Their unique style and sound generated enthusiasm from out of town promoters and their traveling with the top bands started. They toured extensively across the United States and Canada playing the largest ballrooms, polka conventions and festivals. They performed on numerous radio and television broadcasts and were featured entertainers on Caribbean cruises. They played with The Versatones, Marion Lush and Li’l Wally to record breaking crowds.

Their success continued until 1996, when Wanda suddenly passed away. Stephanie decided that she would not continue on without her mother by her side. Two years into retirement, she received a call from her close and dearest friend, Eddie Blazonczyk, Sr., After a long conversation and encouragement, he convinced her to play the concertina and write a song about her mother. She agreed to write and record one more album “Tribute To Wanda, I’ll Always Love You.” Well, wouldn’t you know that it became #1 and promoters started tributes to Wanda. Stephanie had no plans on returning to the polka music field, however, not being able to refuse the promoters she continues on in her mother’s memory. Stephanie decided to made a few appearances. Because the fans continued with the same excitement as when she played with her mom, she started a new band called “Stephanie & Her Honky Band.” But, once again, Stephanie did not want to travel or play full time. Then Edward Haniszewski, Sr., came into the picture and became her manager and driver, as he wanted her to continue with her career.

After recording the “I’ll Always Love You” album on the Sunshine Label in late 1998, she recorded a live album in the Western New York area with a special guest appearance by Eddie Blazonczyk, Sr. He sang and played drums with Stephanie’s Honky Band. Stephanie fulfilled her mother’s dream of recording a live album.

In 1999 a great honor was bestowed on Wanda, as she was inducted into the IPA Polka Music Hall of Fame. Stephanie went to Chicago to accept this award in her mother’s behalf, which was the hardest thing she had to do, knowing her mother could not be there to receive it. Also during that year, another great honor was bestowed as Wanda & Stephanie were the first polka entertainers to be inducted into the Buffalo Music Hall of Fame.

Stephanie then returned to Chicago where her and her mom Wanda first began their successful run recording on the Bel-Aire label. Stephanie put together an ultimate honky band with Chicago musicians for her recordings and road tours. She handpicked the Chicago musicians, such as Eddie Madura, Jimmy Sierzega, Tony Blazonczyk, Wayne Sienkowski and Nigel Kurdziel. At this point not only is she a bandleader, vocalist and entertainer, but also a composer, songwriter and producer. Besides playing the concertina, Stephanie plays the drums, accordion and piano. Stephanie now travels the country playing polka festivals, conventions and major events and entertaining thousands of people.

Stephanie then ventured into her own radio show, by 2010 celebrating ten years of playing the honky-dyno music she loves. Also, her show is heard on http://Polkasonline.com .

After all the years of hard work and two successful careers, one as a mother/daughter team known as Wanda & Stephanie, and the other as a solo entertainer, Stephanie finally reached the pinnacle of her career and was inducted into the “Polka Music Hall of Fame.”