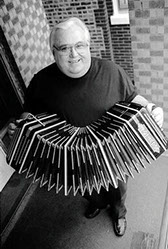 Stanley “Stas” Bulanda’s love for polka music started at a very early age while listening to the music of his fathers’ and uncles’ polka band.

They would let him sit on the stage and started his musical education. After a few years, they even allowed him to sit in on the drums at some of their engagements. It was in high school that he teamed up with a few of his friends and they started a small polka band. They mainly played at house parties, small installation dances and a few parish carnivals.

Stas then joined a band called the Happy Times orchestra, which was together for a few years and played a lot of weddings, anniversaries, etc. While playing with that band, Stas had the opportunity to meet John Furmaniak, who had a band called the Dial-A-Tones. He joined them as a concertina player and they recorded two albums. The very first song award Stas received was for a song he wrote called “Thank You For This Day” on the Dial-A-Tones first album.

After the Dial-A-Tones, Stas went on to play with the Windy City Brass, the Li’l Richard Band, the Music Explosion and then eventually again with John Furmaniak, Ron Flisnik and Bob Pienta, forming the Average Polka Band (APB).

In the first year, they recorded their first album on the Chicago Polka label and the song on the record “Polish Prayer Waltz,” which featured Stas’ two daughters, Erica, age 9, and Jennifer, age 8, won the band three awards. The next year, Wally Maduzia became the fifth member of the APB, playing concertina, clarinet and saxophone. It was then they recorded their second album “Let’s Have A Party,” which earned them a Grammy nomination.

In the following year, Tom Lizik became the sixth member of APB as a trumpet player.

They went on to record another album titled “Stormin’ Polkas.” The song “Polish Traditions Waltz” turned out to be a hit for the band and it was still requested wherever Stas performed.

After several more years with the Average Polka Band, Stas wanted to start a band featuring more of the old time music that he loved so much. He started a band called Dyno-Chicago. He continued the old time traditional music in his last band, The Old School Review.

Along with Bernie Gorak, Steve Fornek, Marty Drazek and John Furmaniak, The Old School Review completed its CD entitled “Glory Days” in 2009. Featured on this and many of Stas’ recordings is his son Tommy, an excellent drummer and sound engineer, of whom Stas was very proud.

The Old School Review went on to become one of the most popular bands in the country. Polka fans everywhere were saddened when Stas Bulanda passed away on January 6, 2010, at the age of 55.