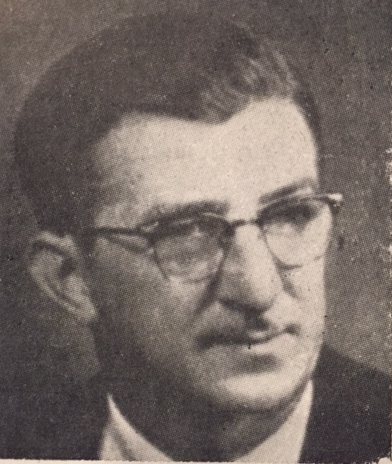 Roman (Romy) Gosz was born on August 2, 1910.  He took his first piano lesson at age 7.  At 11 he joined his father Paul, and his two brothers, George and Mike, in the Gosz family orchestra in 1921.  In 1930 Romy took over the band.  When he lost his trumpet player in 1931 and couldn’t find a replacement, as a band leader, Romy had to fill in himself.  He taught himself to play the trumpet and never went back to  piano.  The Gosz band played all over the state during the 30’s and cut its first polka record in 1930, “Pilsen Polka”.  This big seller led to other recording contracts in New York and Chicago, and the band soon racked up thirty-seven discs for Decca, Okeh, Brunswick, and Columbia.  Among the best sellers were “Picnic in the Woods” in 1938; “Red Handkerchief Waltz” in 1935; and probably the most famous, “Prune Song” in 1933.  In 1934, the Wisconsin American Legion picked the “Prune Song” for its convention theme song; we all know it today as “We Left Our Wives Back Home”.

Romy spent a summer in Hollywood where he met the biggest recorder for Decca—Bing Crosby.  He made his last record for Decca in 1939.  In 1945 he signed with Mercury at the height of his career.

During the 40’s while the nation swinged and swayed with Sammy Kaye, and waltzed with Wayne King, polka lovers in the Midwest were urged to “Jump and Toss with Romy Gosz”.  He was proclaimed Polka King in 1946 when his band took first place in a contest of Midwestern bands and was promptly cited in national magazines like Life, Time, Pic and Coronet.  The band played six or seven nights a week for groups including Dutch, Bohemian, Belgian, German and Polish.  “When I play for a Polish wedding, I’m Polish for the night,” Romy once quipped.  Romy had his own television show for five years and was honored by the Wisconsin Orchestra Leaders Association for his contributions during his 45 years in the business.