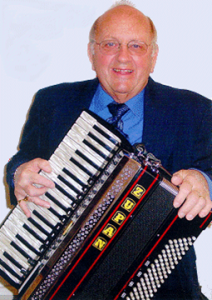 Roger Bright was born February 12, 1937, and died August 28, 2001, at Boulder Colorado Community Hospital from a heart attack he suffered while performing at a polka festival in Boulder.

Roger began his musical career at age twelve. He formed a band at age fifteen and made his first recording at the age of nineteen.  Roger is no stranger to the music and recording industry, releasing fifteen albums of his own assisting others on thirty-five albums and countless singles.  He also produced the 150th Anniversary Wisconsin.  Every Sunday he hosted “The Roger Bright Show,” which aired on radio station 1260AM, WEKZ in Monroe, Wisconsin.

Roger was a member of Frank Yankovic (“America’s Polka King”) and the Yanks and recorded ten albums with Yankovic on the Columbia record label.

Roger played in thirty three states including the major entertainment cities of Las Vegas, Reno and Lake Tahoe.  He performed concerts with the St. Louis Pops Orchestra in St. Louis, Missouri, and at the Town Hall in New York City.  He also entertained throughout Europe and most of Canada.  He appeared on the Tonight Show with Johnny Carson, the Phil Donahue Show, Polka Varieties, the Charlotte Peters Show, the Orion Samuelson Show, Don McNeil’s Breakfast Club and Joey Miskulin’s “Cleveland -The Polka Town.”

He received countless awards, including a commendation from the state of Michigan, a key to the city of Grand Haven, Michigan, and honor for the preservation of polka music for Frankenmuth, Michigan, as well as multiple accolades in his home state of Wisconsin.  Those awards include a special notice for the promotion of University of Wisconsin athletics, the Senior Achievement Award in 1997, Band of the Year in 1997, a certificate of commendation from Governor Tommy Thompson and being inducted into the Wisconsin Polka Hall of Fame in 2000.  He also had been a part of the “Cleveland Style Polka Hall of Fame Awards Show” held annually in Cleveland, Ohio.  He was honored at “Roger Bright Day” in New Glarus, Wisconsin.