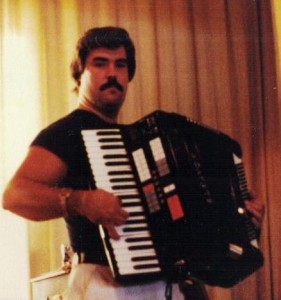 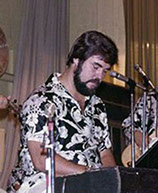 Uniquely, making his name as a sideman, Richie Tokarz is well known particularly in the Polish sector of polka music. Through the years he has demonstrated his talents playing the accordion, trumpet and singing with top polka bands. Also, his efforts as a musical writer have always scored high on the list.

Born on February 16, 1949, to Stanley and Florence Tokarz, he was raised in Whiting, Indiana and he was the older of 2 sons. Tokarz began accordion lessons at the age of seven. He propelled within his ranks when he achieved notoriety for playing polka music duets creatively at accordion recitals. From that time on he has been an instrumental force in helping bands achieve popularity at the national level.

Richie Tokarz wrote four albums for Chicago’s Polka General, Li’l Richard.  He compiled numerous tracks by the late Marion Lush on an “Adults Only” Polish Party polka album, just to name a few. His excellent accordion work on recordings can be heard with Lenny Gomulka & Chicago Push and Eddie Blazonczyk’s Versatones. During the last three decades of the 20th century, Richie Tokarz made a name for himself as a dynamic sideman by traveling the national circuit with Marion Lush, Eddie Blazonczyk and Lenny Gomulka. In addition to his party-like personality, he was also known for his accordion expertise and his natural blend as a backup and lead singer. Making polka music professional and creating new, original ideas were key elements to his sideman popularity status. He was an inspirational role model for many upcoming musicians.

His personality was reflected throughout greater Chicagoland when Rich managed a weekly polka radio program back in the 1970s. Richie Tokarz has been a valuable resource for three notable names in polka music who eventually became synonymous with those entertainers. They are Marion Lush, Eddie Blazonczyk and Lenny Gomulka.  Along with his younger brother, Jerry, Tokarz recorded with Li’l Richard’s Polka All-Stars and the famous Pala Brothers Band of yesteryear.

It was because of his national dedication to polka music and because of the many years of demonstrating his talents on stage and recordings, that Richie Tokarz became a nationally recognizable name in polka music.

During these years Richie Tokarz was the recipient of numerous awards for his talents as a musician and for his song writing ability. He composed over 40 polkas, waltz, and obereks.  He also recorded over 25 albums.  Some of the songs he composed are:

“Stella At the Wheel”

Richie Tokarz passed away on Tuesday, April 22, 2014, from complications attributable to Type 1 diabetes. He was 65 years old.