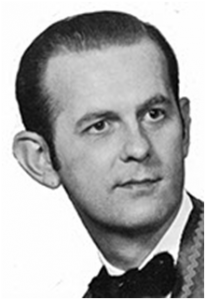 Rich began playing the trumpet when he was about nine years old after seeing a Harry James movie. His first instructor was Polish and it wasn’t long before he had Rich playing music from the instructor’s collection of Polish music.

He and his brother Bob started their own band shortly after they were out of high school and played at local weddings and clubs under the name of Bob Bobinski and His Orchestra. Around 1955 they changed the name to Bob & Rich & the Harmony Kings Orchestra. They made a couple of connections and started to travel. Their first job on the road was in Prospect Hill in Brooklyn, New York, and from then on, the road trips kept coming.

Rich recorded two albums with his brother. The first was entitled “Johnny’s Wedding Day” for Cardinal Records and the second was “Young Lovers” on the Tric Record label.

In 1967, Rich took over the band on his own as the Rich Bobinski Orchestra. Shortly thereafter, the band recorded its first album, entitled “Kiss Me I’m Polish,” which started their climb to the top. About three and a half years later the band recorded their second album entitled “Down By The Water,” which took off. In 1976, Rich released his third album on the DATA label entitled “The Premier of Polkas,” which became an instant success overnight. The new styling of the Bobinski Orchestra, with the addition of the violin, was accepted by polka fans everywhere.

1976 was also the year that Rich started his own radio show “The Polka Hoe-Down Show,” which was heard every Sunday evening on WIOF radio, 104FM from Waterbury, Connecticut.

The Rich Bobinski Orchestra was voted the #1 Band for 1976 and 1977 by the United States Polka Association. IPA Polka Music Hall of Fame member Ray Henry enjoyed Rich’s music so much that he wrote the song “Happy Guy” as a birthday present for him.

At the height of his band’s popularity in 1978, Rich retired the band so that he could take care of his mother. After his mother passed on, Rich decided to start the band again in 1991 and made two more recordings. The first was named “Playing With My Band” and the second “Thanks For Being My Friends.”

Rich lived in Union City, Connecticut, most of his life and his love for people as well as polka music always showed no matter where he performed. Some of his greatest songs include: “Kiss Me I’m Polish,” “Down By The Water,” “Baa Baa Polka,” “Skinny Minnie,” “Playing With My Band,” “Thanks For Being My Friend,” “Elenora Oberek” and the #1 top song for the year 1977, as named by the United States Polka Association, “Hoe Down Hank.” He and his band also received many other awards from the different organizations for which he played.

Band member Marty Swiatek continued the band as Marty Swiatek & RBO as per the wish of Rich. In 2010, June Ingram took over the band as The Rich Bobinski Orchestra and continues to play to large enthusiastic crowds.