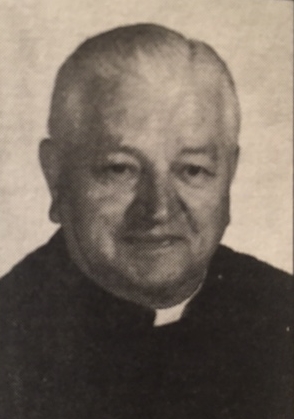 Father Wally, as he was affectionately known, was one of eight children born to St. Louis and Magdeline Szczypula on September 22, 1916.  He was born and raised in Chicago where he attended Five Holy Martyrs grammar school.  He went on to Quigley Preparatory Seminary and then to St. Mary of the Lake Seminary in Mundeline, Illinois where he was ordained a priest on May 1, 1943.  Over the years, he became involved in many organizations, but he was especially proud to serve as chaplain of the International Polka Association.  Because of his pride in his Polish heritage and his love for Polka music, the International Polka Association was very close to his heart.  Polka music was always part of the Szczypula household.  Even as a young child, he could always remember on Sunday mornings the radio was tuned to the Polka station.  In fact, anyone who knew Father Wally, knew how much he loved and treasured his concertina.  You didn’t have to twist his arm to have him play it either.

Father Wally had a great love for life.  You knew this by his love for his Polish heritage, his love for Polka music and his love of laughter.  How could we ever forget the jokes he told and how he would laugh the loudest at them.  His love for people made him a special person and priest.

As Father Wally’s body laid in Five Holy Martyrs Church, I sat there and thought of the many family functions he could not attend due to other commitments.  I watched as hundreds of people, young and old, passed his casket.  It was then I realized that he did not belong to us alone; he belonged to all of you and to the thousands of others whose lives he has touched through his forty-seven years as a priest.

Father Wally served as Chaplain of the IPA in the 70’s, 80’s & 90’s and initiated the idea of the Polka Mass at IPA Festivals.  He played concertina with the 47th Street Concertina Club band and participated in many jam sessions.  He financially supported many polka activities and provided counsel and encouragement to many polka followers.  He was a polka comedian performing at polka stage shows at the Kelly High School auditorium in Chicago, Illinois.  He was instrumental in hiring polka bands to play at parish festivals and carnivals and always encouraged other parishes to feature polka music at events.  Father Wally’s spirit will be kept alive through all of his contributions to the Polka industry.