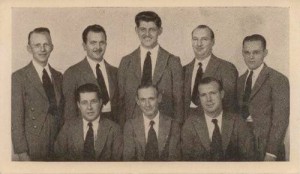 In 1933, a fresh 18-year old country kid named Ray Stolzenberg launched his band, The Northern Playboys, at a dance in LeRoy, Minnesota.  From small community dance halls they went on the road to playing in ballrooms from St. Paul to Cedar Rapids, from Kansas to Chicago for the next 18 years, going practically seven days a week.  Stolzenberg, a drummer, had about a thousand arrangements in his music library.  He was featured on radio KATE Austin, KAUS and KROC Rochester.  His band appeared regularly on a music program from the Mankato TV Station.

In 1967 when the band business declined, he opened a music store.

Back in the ’40s the band cut eight 78 rpm records, followed by a number of 45’s and several LP albums.  Upon his retirement, he moved to Sun City, Arizona.  In 1980, all of his band members followed him, making their homes in the Phoenix area.  They have begun playing in the area and have stacked up booking engagements for a year in advance