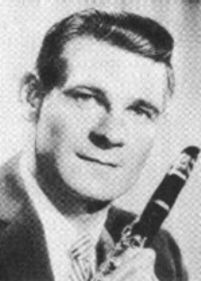 Ray is the son of Frank and Lottie Budzilek, who were both born in Warsaw, Poland.  He played polka music at about 8 years of age on a toy piano.  He then switched to accordion and began playing at weddings.

He organized a musical aggregation in his late teens in his home town of Cleveland.  It developed into a big band sound with a huge following.  Ray’s vocals, his accordion, plus the band members’ versatility, soon earned the group a reputation as far as the Eastern seaboard.  The out-of-town bookings soon outnumbered the Cleveland dates.

But, the Korean conflict interrupted the meteoric climb to success.  Ray was called to duty and was severely injured while fighting with the Second Infantry Division.  He sustained spinal injuries and returned to Cleveland in a wheelchair.

No longer able to play accordion, he learned to play the clarinet and sax, and put together another orchestra.  Bookings poured in and a session with Capitol Records resulted.  “Ice Cubes and Beer” launched Ray on his way.  Next, two albums were cut for Epic.  More records then followed for Roulette and other companies.

In 1966 he was in an auto accident, hit by a semi-truck on the Cleveland freeway.  A piece of glass lodged in his leg and gangrene set in.  Five operations resulted.

Sadly, he is no longer with us.