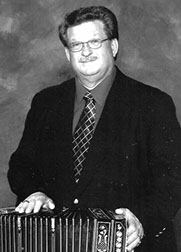 When one hears “Wendinger,” it is difficult to think of Peter without Paul. “Peter and Paul,” the concertina playing duo, had been a household name in the polka industry for over 47 years. Their partnership began as children playing with their tractors, pretending to be farmers. As they became older, they farmed 400 acres of land, milked cows, operated a large hog set-up, raised their families and did what they loved most – played polka music!

Peter and Paul did not come from a musical family, however, their parents attended many old-time dances and became friends of bandleaders such as Whoopie John Wilfahrt, Harold Loeffelmacher and Fezz Fritsche. Paul would smile when he talked about his childhood birthday parties. “I didn’t have classmates over for my parties. Ma and Pa invited musicians and their own friends and we had polka music!”

It was Polka Day 1962 when Peter and Paul’s father purchased their first concertina from the Christy Hengel display in New Ulm, Minn. At the ages of 9 and 11 they formed a polka band in the tiny town of St. George, north of New Ulm and from there took the show on the road. Their first engagement was for the wedding reception of their neighbors, George and Marian Altmann. Compensation for the event was a pair of black socks for each of the boys. Their first actual “paid” job took place on January 15, 1964, for the John Deere Day in Gibbon, Minnesota. They received a check for $5.00. Peter and Paul & the Wendinger Band grew in popularity and many times the “boys” were mistaken for twins. Their instruments, however, were “twin concertinas” and that’s how the band was promoted throughout the years.

The toe-tapping music with concertinas, bass, percussion and dynamic vocals led them to a worldwide travel industry and, in 1976, Peter and Paul escorted their first tour to a polka festival in Honolulu, Hawaii. Wendinger Band & Travel, Inc., is family owned and operated in the lower level of Peter and Dodie’s home.

When Peter and Paul Wendinger, Jon Wendinger, Mike Simon, Steve Moran, Larry Roepke, and in previous years Gary Schroeder and Gary Gleisner, took the stage, it wasn’t “just” a band. What you saw and heard were “brothers,” partners and friends and that special bond continues today. Paul’s presence is felt with every beat of the music. Since Paul’s death on November 10, 2010, at the age of 59, Jon Wendinger, drummer and vocalist for the group, has taken on the responsibilities his father once held and joins Peter with booking jobs and carrying on the tradition of their weekly Sunday radio show in New Ulm, Minn. Their musical group once known as the Peter and Paul Wendinger Band has now become “The Wendinger Band” proudly entertaining “for Generations with Generations!”

Peter and his wife, Dodie, are married 42 years and have four children, 8 grandchildren and one great-grandchild. Paul and Joleen, who were married 38 years, were blessed with five children, 15 grandchildren and one great-grandchild. Paul gave every bit of credit for his success to God, his parents, family, fellow band members and the dedicated following of people who attended their dances.

Special recognitions over the years included: Began playing concertina at nine years of age; 1976 – beginning of Wendinger Travel – polka festival in Honolulu, Hawaii; 1985 – Minnesota Ballroom Operators Old Tyme Band of the Year; 2005 – Induction in the Polka Hall of Fame, Chisholm, Minn., and Induction in the World Concertina Congress; 2007 – Induction into the Minnesota Music Hall of Fame. He was honorary co-chairperson of the Brown County Relay for Life in 2010 and could be heard on the weekly Sunday radio show broadcast worldwide on KNUJ (860 AM) and knuj.net; 23 recordings of polkas, waltzes and modern; and accomplished 4,832 band engagements and 1,108,930 miles in 47 years of entertaining.

In the year 2007, Paul’s career of music, traveling, farming and health began changing when he was diagnosed with terminal liver cancer. He continued to be involved with the family business as much as his condition allowed, but in that past year was unable to actively participate. Not wanting to exclude his brother, Peter kept Paul up-to-date as much as possible with discussions and decision making. Paul’s Caringbridge Journal, documented daily by his wife, kept in touch with an overwhelming 215,000 visitors to his site. Family, friends and his musical family from around the world sent comforting thoughts and prayers. The “miles of smiles” were slowly drawing to a close.

Paul Wendinger had a purpose in life. He loved his family dearly, he found sunshine above every cloud in the sky, always reminding people that “life goes on,” and he never hesitated to invite young musicians to the stage, just as he and his brother had done so many years ago. Paul would be pleased to know that his musical contributions and that of so many wonderful musicians, living and deceased, have not gone unnoticed. He would proudly say, “Thank you to everyone who supports the music industry that makes people happy – Polka Music – and always remember to keep smiling!”