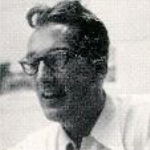 Rock ‘N’ Roll may be here to stay, but so is polka music, according to Norman Marggraff.  Marggraff should know: For over 40 years he has made a living spinning “oompah”-type records on the radio.  If the name Marggraff doesn’t ring a bell, perhaps his other name, Fritz the Plumber, will.

“Fritz the Plumber, they don’t come any dumber,” Marggraff joked one recent Saturday morning as he broadcast from WYLO in Jackson, Wisconsin.  He had made a career of being a corny, befuddled disc jockey.

Marggraff admits that his listeners, an average 20,000 an hour, are mostly middle-aged or older.  “But a funny thing is happening,” he said.  “The college kids are going for this kind of music.  The music must have some merit.  It’s uplifting for the working people.”

For many years the Fritz the Plumber image consisted of Oshkosh B’Gosh bib overalls, black tails, derby and a big mustache.  This has been replaced with a business suit.  Also replaced was the trademark German accent.  “A minute commercial lasted a minute and a half when I talked with an accent.”

While creating the “Fritz” identity, Marggraff made himself a polka expert.  He claims his collection of 8,000 polka records is the largest in the country.  His taste in music extends to country western and classical, and Marggraff said he would love to see country and western combined with polka.

“This music (polka) is not for spectators.  People get involved.  When a band starts to play everyone is out there dancing.  There’s a lot more variety to a polka band.  They have to know a lot of different songs and music, or they’re out of business.”

When speaking about his career playing polka music on the radio, he said, “This job was supposed to have lasted for two years.  I’m happy with it.  After all, music soothes the savage beast.”