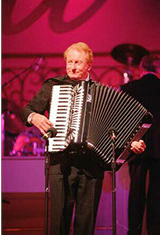 The 1990 honorees to the Living Category of the Polka Music Hall of Fame were two individuals who have both in their own ways made great strides in the promotion and advancement of polka music.

Myron Floren is a highly recognized name in the entertainment world besides his relationship to polka music.  He was born and raised on a farm in Day County, South Dakota.  His interest in the accordion began after hearing a neighbor play at the house parties that the farmers usually had on Saturday night.  While still in school he started in radio on KSOO in Sioux Falls, South Dakota.  At KSOO he played an early morning show that featured many of the familiar waltzes and polkas of both Polish and Scandinavian origin.  As his career progressed he entertained in Camp Shows from 1944 to 1945 in World War 11 in the European Theatre.  In 1946 he joined the country group, the Buckeye Four, in St. Louis and played with them on the Mutual Radio Network from 1946 to 1950.  Also in St. Louis in 1948 he started in television on KSD-TV.

His most famous association was with the Lawrence Welk Big Band, which he joined in 1950.  He spent a year on the road doing one-nighters across the country and landed in California in 1951.  There they did a few shows on KTLA-TV.  The reaction was so great that they did another four years for them and then went network in 1955.  The show was then a weekly edition until June of 1981.  There are still about two hundred stations on PBS carrying the show on a weekly basis.

The Lawrence Welk Show featured Myron playing many polkas.  According to Mr. Floren, “I guess we did one practically every week.  I even remember an instance where we were saluting Duke Ellington and Lawrence added a polka just in case.”

Myron and his wife resided in California at the time he was inducted into the Polka Hall of Fame. All of their five daughters are grown, and four have families of their own.  They also had seven grandchildren.

He averaged about 150 shows a year around the country.  Many of the shows were with big bands and he performed with the Jimmy Sturr Band on a regular basis.