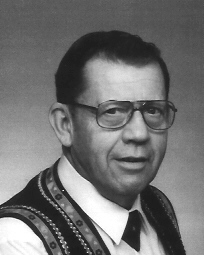 Matias “Math” Sladky grew up on a farm near Wahoo, Nebraska. With the love of polka music in his heart, when his folks would go to a dance, he would head straight for the stage where he would sit all evening watching the musicians.

Sladky always wanted to play drums but his father tried early on to convince him to play the accordion. At 14 years old, with his father’s suggestion, he tried accordion lessons for a while in Fremont, Nebraska, but fall harvest came and that was the end of accordion playing. As a young lad, Sladky acquired a small set of drums from an aunt as a Christmas present and began his drum practice listening to a Yankton, South Dakota radio show program at 6:15 every evening.

As a teenager, he was able to buy his first real drum set and played with a group of friends with whom he attended Catholic Youth Organization meetings in his hometown. In 1952, he bought some band equipment from a defunct band and his career began to jell. Soon after that, his band began playing “live” every Sunday on KLMS Radio in Lincoln, Nebraska for over 7 years. During the week his music was taped. With playing on the radio, his band popularity flourished that there were some weeks he played every night and several years he played over 300 jobs. At the height of their popularity, “BillBoard” magazine rated Matt Sladky and his KLMS Polka Band as #1 in Nebraska.

In 1960, Sladky began to tire of the frenzied pace and gave up his band to farming. Little did he know that farming wouldn’t last as being a member of the National Guard, he was called to active duty in 1961. After his service call-up, he began missing his playing polkas, so he started another band. Sladky has released 21 recordings of polkas and waltzes with his band. His band has played from Canada to Texas and Ohio to Wyoming. Sladky has even taken polkas to the pulpit. In the late 1970s, he and a priest from Brainard, Nebraska, Fr. John Ludvik, developed a polka mass patterned after one in Minnesota. He was privileged to play the polka mass with the Bishop of Grand Island, Nebraska, in Farwell, Nebraska. He also did a polka mass with the Archbishop of Omaha, Nebraska, and the Archbishop of Mitchell, South Dakota.

In November of 1987, Sladky was inducted into the Sokol Omaha Polka Hall of Fame and in January of 2002 he was inducted in the Musicians Hall of Fame in Milligan, Nebraska. “He’s paid his dues in the polka music business”, said Ron Nadherny, master of ceremonies of the Omaha Polka Hall of Fame. “He’s worked hard for his success”. Nadherny himself a musician who has known Sladky for many years, tried long ago to figure out what made his band tick. “It was amazing how people responded to him,” Nadherny said. Sladky’s secret, Nahderny discovered, was the way he related to his audience. Billed as the friendliest band in Nebraska, he and his colleagues reach out to their audience on a personal level, dedicating tunes to individuals and couples between numbers, Nadherny said. Wearing his trademark black vest with yellow and red trim, Sladky leads his band from behind his drums with an occasional whoop to the audience. “Nice to see you, Anton,” he yelled out to a dancer and his partner as they danced by the stage.

The dancers like the beat, the tempo and the accordion variations. Mostly though, they love to dance. Also, there is Sladky’s singing. “He’s one guy that can sing any song that there is, whether it be in Czech or English” are the comments heard from the various people. A full blooded Czech, he speaks his language very fluently.

“When I started school, I didn’t know a word of English,” he said. “Good thing the nun at school was a Czech so she helped me learn English.” Sladky remains proud of his Czech heritage. He has taken 21 tours to Czech Republic and Europe since 1982 and has a cousin still living in the same house his father was born and raised in. His part time job is organizing tours to European countries. His favorite tours are the family tours that he arranges for folks to try and find their roots in the Czech Republic.

Sladky added, “In his younger days the ballrooms were filled with people of all ages.” On weekends, family entertainment meant polka dancing. Now he feels there is too much emphasis put on sports and this has taken away from the family polka dancing. If the young folks would just try it a few times, they’d realize it is very happy music and a lot of fun.

At 75 in 2005, Sladky and his wife Dorothy was living in the little Czech town of Valparaiso, Nebraska. His five piece band and also his combo mainly played in taverns, small town dance halls and ballrooms. Sladky’s comment is, “His love for playing his drums and good old polka music will always remain in his heart”.