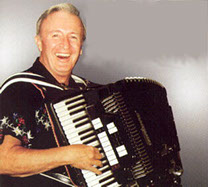 Born in Frankenmuth, Michigan, on August 9, 1932, lived there until his decease.  Having a natural affinity to music, at age 12 he began playing a forty-eight bass accordion, then acquired his own and played his first job the following New Year’s Eve.  With his father, Otto Herzog, playing the banjo, and his friends Bill Braeutigam on the drums and Arno Rogner on the guitar, his first band was formed.  Being of German descent in a uniquely German community, Marv attended many festivals and functions featuring old country music.  His father sang in a male community choir which performed many of the traditional songs that Marv has since had so much success in reviving.  Marv continued the polka band throughout his teens, the members gradually changing.

In January 1953, Marv entered the service.  While stationed at Camp Chaffee, Arkansas, he won the Army competition for the right to represent them on a national TV show originating from New York.  Released from the service in January, 1955 he almost immediately formed a new polka band, taking up where he left off.  He played functions and festivals in the Frankenmuth area, while at the same time appearing with his sisters in a country group featured on a weekly TV show sponsored by the Michigan Milk Producers Association.

The first Bavarian Festival was celebrated in Frankenmuth in 1960, and featured Marv’s band as part of the entertainment.  It has become one of the major annual festivals in the country.  Marv’s band was the only one to have been featured every year.  Marv co-sponsored the 10-day annual Summer Polka Fest in Frankenmuth, featuring nationally known polka bands.

The Bavarian Festival inspired Marv’s first record.  “Marv Herzog at the Bavarian Festival” was released by Sound, Inc., in 1965.  A new album has been released every year since.  The group performed a broad spectrum of popular polka music from his own native German “Schnitzelbank” and “Oktoberfest” albums, to others that feature Polish, Italian, English, or whatever language best fits the song.  This in part explained Marv’s acceptance by all ethnic groups associated with polka music.

In 1971, a fan club was formed.  Its members include over 2000 fans who faithfully wear their blue jackets at polka functions and festivals.

Marv had a weekly polka radio show in his area since 1965, beginning on WSAM-AM and later on the 50,000 watt WKCQ-FM.  He also co-hosted a highly rated daily evening polka program.

Marv Herzog’s career was long and successful, destined to go on to even bigger things as his talent and personal magnetism attracted new fans with every performance and recording.