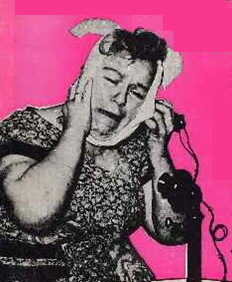 She was known in the polka field for her song hits “Wishing Well Waltz” and “Violins Play For Me”; but she was also known in the radio and stage field as a radio announcer, operatic and concert singer and a comedienne.  Gifted with a great voice and acting talent, she used her abilities well. A soloist in the Midwest and San Carlo Opera Company, she sang in “Il Travatore,” “Hansel and Gretel,” “Barber of Seville,” and other operas.  She frequently appeared in Grant Park concerts and did summer stock for two seasons at Music in the Round in Skokie in “Gentlemen Prefer Blondes.”  She was an accomplished character actress and singer and her specialty was comedy.  Her appearances took her to Toledo, Detroit, Cleveland, Buffalo, New York, and Canada.

In her 30 years as a radio announcer and actress-singer, she did a great deal for her fellow man:

• Over $10,000.00 raised through the Marisha Data radio program on WHFC for the restoration of the Salvatorian Fathers Seminary in Trzebina, Poland.

• Thousands of dollars raised for Infantile Paralysis and Red Cross through Clubs and organizations working for these causes with her continuous advertising and personal appearances.

• For fifteen years collected stamps and aid for the Missionary Sisters in Africa for which hundreds of dollars worth of medicine has been purchased.

• For many years she has worked for Veterans and Old Peoples Homes with donations through her radio program and personal appearances.

• Form 1969 to 1972 had been sending help with donations from her radio listeners for blind children in Laski, near Warsaw, Poland.

• She worked for church benefits and made patriotic appearances.

She never received any pay for doing any of the above mentioned projects or accepted money for advertising them on her programs.  All these charitable works were done with love to help others.

Although she passed on October 12, 1972, the voice of Marisha Data is still heard on the air today.  Her songs and comedy skits get many spins on polka programs throughout the East and Midwest.