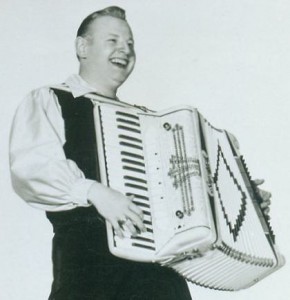 Lou Prohut was born in Chicago where he attended local parochial schools and began studying the accordion almost as soon as he learned to walk.  His talents led him to an appearance on the famed Morris B. Sachs Amateur Hour when he was a mere five years old.  After breaking into the professional ranks over radio station WNQX in Yanktown, South Dakota, Lou entered the keen competition of the Horace Heidt show and became a ten-time winner.

Out of town triumphs, came the engagement with the Heidt aggregation at famed Carnegie Hall for the United Nations; a world tour in representation of the U. S. Marine Corps; engagements at the lavish Sahara and Flamingo Hotels in Las Vegas; a guest appearance on the Lawrence Welk Show, and other engagements.

In 1958, Lou Prohut and his Polka Rounders captured a warm spot in the hearts of viewers with their ABC-TV network program “Polka-Go-Round.”  When the show terminated, Lou continued in the entertainment field.  He owned a small plane which he flew to his out-of-town engagements.

Lou’s career was interrupted by an early death because of leukemia.  He was survived by his wife, Lou Ella, and six children.