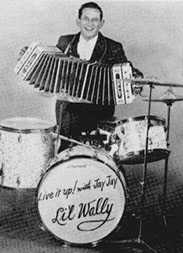 Li’l Wally has been one of the most important and influential polka musicians in America. He was responsible for creating the Chicago-style polka, a slower, more danceable, more improvisational sound, whose core appeal lay with Polish-Americans.

Wally was a cottage industry unto himself, recording at an often frantic pace and releasing over 150 albums on his own Jay Jay label. He played both concertina and drums in concert, and performed good-humored dance tunes and sentimental ballads with the same unwavering enthusiasm. So popular was he that he and Frankie Yankovic became the first inductees into the Polka Hall of Fame.

Walter Edward Jagiello was born in Chicago on August 1, 1930. His parents were both Polish immigrants, and he was exposed to polka music very early on – so much so that he gave his first public performance at age eight, fearlessly taking the stage at a neighborhood picnic to belt out songs with the band. He started sneaking out to hear polka music in the clubs along Division Street, and was soon getting professional bookings as a singer with the bands he met. He completed his education at Holy Innocents School, but did not go on to high school. A self-taught drummer and concertina player, he started playing with Chicago polka godfather Eddie Zima at age ten, and was leading his own band at 14. His first recording session came in 1946 for his own small Amber Records label, at which point he was still singing entirely in Polish.

In 1949, Wally recorded eight songs for Columbia Records.. Dissatisfied with the experience, he launched Jay Jay Records in 1951, and unleashed a torrent of music; during the ’50s, he often managed to turn out ten or more LPs a year. His slowed-down style left his musicians plenty of room to improvise as they saw fit.

Li’l Wally bought an office building on Kedzie Avenue in Chicago, but it did not have a recording studio or a pressing plant. He had the recording studio built with the help of Jim Hogan, an engineer who worked for the Motorola Company. He purchased the pressing equipment from the Finebilt Company of Cincinnati, Ohio, and George Fineberg installed the equipment for pressing records

Wally’s style became so popular in Chicago that virtually every other polka band in the city had to adapt their own sound to fit his blueprint. His burgeoning popularity crystallized into a breakout national hit in 1954, thanks to his first English-language recording, “I Wish I Was Single Again.” It sold over 150,000 copies in Chicago alone, and climbed onto the national charts, where it topped out at Number 22. However, Wally was so overwhelmed by the duties of recording, performing, and running the label that he began to suffer from ulcers; he took some time off for a vacation in Miami, and liked it so much that he and his wife would eventually move there permanently.

In the meantime, however, Wally returned to Chicago and resumed his prolific writing and recording pace. He scored numerous hits with polka audiences over the years, including the all-time polka standard “No Beer in Heaven,” “Li’l Wally Twirl,” “Johnny’s Knockin’,” “She Likes Kielbasa,” “Seven Days and Seven Nights,” “Take Me Baby,” “Chicago Is a Polka Town,” “Liechtensteiner Polka,” “Two Bucks Polka,” “To Be in Love With Someone,” and many, many, many others. He played gigs all over the Midwest whenever he could, touring with a core trio (concertina, trumpet, and drums) and adding a clarinet, bass, and/or violin player for bigger shows; most of his musicians held day jobs in factories, so there was near-constant turnover in his backing group. At the peak of his popularity, he had a polka radio show in Chicago, and played some of the city’s biggest dance halls, including a high-profile debut at the Aragon Ballroom in 1955. He also bought his own record-pressing plant, which enabled him to control more aspects of his one-man polka industry.

During the ’60s, Li’l Wally appeared three times on The Lawrence Welk Show. He opened a polka bar called Carousel Club and Bar, which he eventually sold because his health dictated that he move to the South. The studio and pressing plant were also sold due to his health problems. By the end of the decade, he and his wife had relocated to Miami, where Wally bought a recording studio. In 1969, he and Frankie Yankovic were selected as the two charter members of the Polka Hall of Fame.

Wally continued to tour and record from his Miami home base, and managed another big polka hit with 1982’s “God Bless Our Polish Pope.” The unabashedly sentimental ode to Pope John Paul II got Wally the chance to perform for him in 1984. In later years, Wally teamed up with the new-school punk-polka outfit, the Polkaholics, in concert, though his own brand of polka remained defiantly traditional in the face of a wider country & western influence.