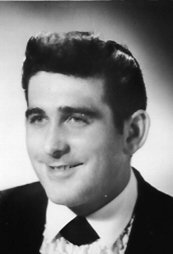 Li’l Richard Towalski was born in 1942 in Chicago, Illinois. When he was four years old, grandma began taking him to picnics at Caldwell Woods. At age ten, he formed a polka band and started his musical career playing in local clubs, at carnivals, wedding and anniversary parties. All the while, grandma helped him with the Polish lyrics. He recorded his first 45 rpm single on the Ampol label at age fourteen. At age eighteen, he made his first LP album on Chicago Polkas. His radio career began at age fifteen with a polka show on WOPA in Oak Park, Illinois. Both careers as a musician and DJ were interrupted by Uncle Sam who called him for a hitch in the Army. During his stay in the service, he was assigned to the 2nd Division Band in Korea.

Upon his return, he started where he left off, with a polka show on WTAQ in LaGrange, Illinois. He then expanded to WONX and WEAW in Evanston, Illinois, WVFW in Dundee, Illinois and many other stations in the Chicagoland area.

In March of 1969, during an appearance in Milwaukee, Wisconsin, Li’l Richard was presented with a four-star flag and portrait of President Eisenhower and proclaimed “Polka General” by patriotic and loyal polka fans of Milwaukee and Chicago. “Li’l Richard Day” was designated as November 9, 1969, by a proclamation from the Mayor of Chicago, Richard J. Daley. In May of 1970 his band was selected as the first polka band to perform on the campus of Notre Dame University in Indiana. He changed the name of his band to the “Polka All Stars” and made appearances in Missouri, Iowa, Michigan, Ohio, Pennsylvania, Massachusetts, New York, New Jersey and Canada.

Li’l Richard made his living as a full time musician and radio host. He recorded 28 LP albums and CDs on four different labels. His best seller, the “Polish Wedding Album” recorded in 1968, is still selling today. After recording his last CD, “Li’l Richard Sings,” he died on March 28, 2001.