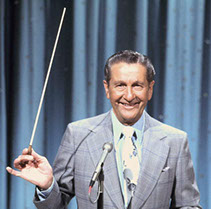 The late Lawrence Welk is no stranger to millions of people. Through his efforts the polka and the accordion have become two items that have always been identified with making people happy.

Welk was born to immigrant parents in March of 1903, in a farmhouse near Strasburg, North Dakota. He was one of eight children. Early on, his father taught him how to play the accordion, and by the time he was 13, he was earning money playing at local social affairs. At age 17, he talked his father into buying him his own accordion, and promising to stay on the farm until he was 21, turning over all the money he made playing locally.

When his 21st birthday came, he and his father kept the deal, and Lawrence was free to go out on his own. At this time he spoke only German and had a burning desire to form his own band. He did and also bought and operated a series of small business, which failed. However, his luck improved musically and his band was one of the bigger ones around playing many engagements.

In Yankton, South Dakota, he met up with Fern Renner, who would become his wife in 1931. In 1938 his band had grown to 10 pieces, and Lawrence managed to bet a booking at the William Penn Hotel in Pittsburgh. This is where the band found the name “The Champagne Music of Lawrence Welk.” In 1940, the band was offered a two week booking at Chicago’s Famous Trianon Ballroom, which turned out to be a ten-year engagement. Lawrence and his three children packed up and moved to the Chicago Suburb of River Forest. This was one of the families happiest times. However, when the popularity of the big bands started to dwindle towards the end of the decade, the band had to hit the road again.

In 1951 Lawrence appeared on KTLA-TV on a late night program. The response was amazing, people wanted to come down to the station and join in on the fun. Lawrence felt that he had finally found the medium he had been searching for …  television; it wasn’t until 1955, when The Lawrence Welk show started its 16-year run on ABC-TV. During that time, he refused to let advertisers hawk liquor or cigarettes, and he never hired a comedian for fear of some off-color humor. It was strictly a family show and true family values. He credited the shows popularity to hard work and discipline and excellence of his performers. Every show featured a polka either performed by Lawrence himself or another member of the show. He never forgot his heritage and the music he grew up with and loved.

After ABC-TV felt that the show popularity was dwindling, the show went into syndication for 11 years where his audience and popularity became even greater. Lawrence retired in 1982, but the show still continues today on Public Television and since 1987 it still has been drawing a phenomenally large audience. Today many of the shows performers are still traveling around the country entertaining. In Branson, Missouri. The Champagne Music Theatre has opened a Lawrence Welk Museum.

Lawrence made the accordion and the polka household words for many years. He was posthumously inducted into the IPA Polka Music Hall of Fame during the 26th Annual Awards Banquet on Saturday, August 6, 1994 at the Ramada O’Hare in suburban Chicago